Aerial refueling has been around for many years, but the technology has come a long way since the first in-flight refueling took place.

NGSS: Engineering Design:  Ask questions, make observations, and gather information about a situation people want to change to define a simple problem that can be solved through the development of a new or improved object or tool. 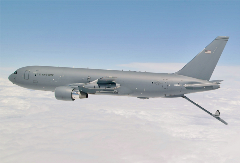 When an airplane takes off, the engine or engines must work extra hard, just as a car does when going uphill.  This burns a lot of fuel which the airplane could otherwise use to get from one place to the next.  If the airplane could refill its fuel tanks in the air, it could go much further.  Some planes have the ability to refuel from other planes while flying.  This is called mid-air refueling.  This is especially important to military aircraft, because it lets fighter planes go much further than they could just on their own fuel tanks.

Can you think of a good application of aerial refueling?  How do small fighter aircraft fly across the ocean?  How close do you think the receiver aircraft needs to be to the tanker to refuel?

NGSS: Engineering Design: Define a simple design problem reflecting a need or a want that includes specified criteria for success and constraints on materials, time, or cost.

You have probably heard something about aerial refueling – what is it?  Aerial refueling is the transfer of fuel from one aircraft to another in the air.  Refueling operations are important for our military missions.  Both small and large receiver aircraft utilize refueling.  Boom systems deliver to all types of military aircraft.  Probe-and-drogue systems deliver fuel to small receivers.

In order to refuel these aircraft, modern tanker aircraft carry even more: a KC-135 carries 22,000 gallons of fuel, and the new KC-46 carries 31,000 gallons.  That is as much as three large tanker trucks!

Modern aircraft use one of two systems for aerial refueling:  aerial boom or probe-and-drogue.  In the aerial boom system, used primarily by the Air Force, the receiving plane flies in close formation to the tanker.  A boom operator in the tanker then flies a rigid boom into a receptacle on the top of the aircraft.  The probe and drogue system, used by Navy, Marine, and Army aircraft, uses a flexible hose with a basket on the end, called a “drogue,” that looks like a badminton shuttlecock.  The receiving aircraft has a rigid probe that plugs into the basket.  This requires some skillful piloting by the receiving aircraft.  This video shows an F18 pilot refueling.  Also, sometimes mistakes are made as is seen in this video.

Because the boom is flown to the receiving aircraft, it is easier for large aircraft to connect.  This is true because the pilot just has to hold position, and the boom operator flies the boom into the connection.  The boom can also pump a lot more fuel: 6000 lb (880 gallons) per minute!  This is also better for refueling large airplanes which have much larger fuel tanks.

On the downside, tanker aircraft only have one boom:

Here is another article with a series of pictures and stories from an Air Force refueling boom operator.

The probe and drogue system can only pump 1,500 to 2,000 pounds (220 to 290 gallons) per minute.  But a single aircraft can carry multiple drogues, allowing more than one aircraft to refuel at a time.  This system works better for refueling fighters and helicopters.  Multiple fighters are shown during refueling in these links.

One use of aerial refueling is to extend the range for the receiver beyond what it could normally fly.  Another purpose is to allow surveillance aircraft to fly for longer times without landing.  The military may also want to move small aircraft to a new operating base, e.g., move fighters from the United States to Europe.  Since the route is over water, aerial refueling allows the fighter to fly the great distance without needing to land.

Aerial refueling operations require extensive training and are one of the most difficult flight maneuvers for a pilot.  The tanker and receiver are approximately 35 feet apart during boom refueling and about 80 feet apart in hose-and-drogue refueling.  The airflow around the tanker and the receiver aircraft is complex and makes maneuvering of the aircraft a challenge.  In addition to the basic challenge of flying the aircraft, the boom has control surfaces (i.e. small wings) and is maneuvered by the boom operator during the process of connecting to the receiver aircraft.  Some refueling operations are at night or in rough weather, making the maneuvers more difficult.  The boom operator has night vision cameras to help with night-time refueling.  The tanker has special marking and lights to assist with refueling, as well.

The new United States Air Force tanker, KC-46, has both boom and probe-and-drogue refueling.  This tanker can transfer 1,200 gallons of fuel per minute to a receiver through the boom and 400 gallons of fuel per minute through the hose and drogue system.  The tanker can refuel two aircraft at the same time.  Aircraft autopilots and boom-automated controls, as well as advanced cameras and lighting systems, have improved aerial refueling operations to the point of being almost routine.  Here is a link to a description of the Boeing KC-46 aerial refueling system.

NGSS: Engineering Design: Evaluate competing design solutions using a systematic process to determine how well they meet the criteria and constraints of the problem.

The tankers used by the United States Air Force utilize modified commercial airplanes and add military systems.  Large fuel tanks are added in the fuselage of the aircraft to carry the fuel to be transferred to the receiver aircraft.  The other key systems to transfer fuel from the tanker are a boom with control surfaces.  The boom is approximately 35 feet long and is on the bottom of the fuselage of the tanker.  The boom is deployed by lowering its aerodynamic control surface and may be extended about 35 feet.  This means the receiver aircraft must fly an approach to the tanker that puts it within 35 feet.

The boom operator maneuvers the boom to make contact with the receptacle on the receiver.  The relative positions of the two aircraft must be maintained during the refuel operation within the maneuver envelope of the boom.  If a problem occurs then the boom will automatically disconnect from the receiver.  The flow field around the aircraft is very complicated and contains flow gradients that the receiver and tanker must overcome with their control surfaces.  These flow gradients are caused by the tanker wing and control surface downwash and vortices, wakes from the fuselage and boom, and the bow wave from the receiver.  Do you know what a wake is?  Vortices?  A bow wave?  Hint: You can see a wing tip vortex when an airplane flies through fog or you can see a bow wave in front of a boat moving through water.

Another system that the United States Navy receiver relies on is the probe-and-drogue system.  The KC-46 tanker has three of these systems which deploy a drogue attached to a hose: two in pods on the wing and one on the lower fuselage centerline.  A long hose with a nozzle at the end, about 80 feet, is wound on a spool inside of a wing pod or a spool in the fuselage.  A small drogue is an aerodynamic device that is attached to the end of the hose to control its path and maintain stability when the hose and nozzle are deployed.  The receiver has a probe that mates up to the hose nozzle and then fuel is transferred.

Both boom and drogue systems must operate over a range of flight speeds and altitudes called the refueling envelope.  Each receiver type has a small speed range and altitude at which it is best to refuel.  Thus, the tanker aircraft must slow down or speed up to match the receiver’s ideal refueling speed.  The maximum altitude of the receiver may also force the tanker to fly at lower altitude.  The weight and speed of the tanker and receiver also influence the “angle of attack” of each aircraft.  The result of speed, altitude, and weight creates large variation in the flow field around the tanker aircraft.  To design a refueling system for a tanker and the many receiver aircraft types requires a large investment in wind tunnel testing, flight testing, computational modeling, and simulation.  Thus, tanker aircraft designs are very complicated.

This article describes aerial refueling mission planning.  The following is a precis of part of Sections 2 and 3 of the overall document:

The purpose of air-to-air refueling is to allow airplanes to fight more effectively by increasing their range, the amount of weapons and ammunition they can carry, and the time they can spend in the air.  It allows air power to be used farther from home and concentrated where and when it is needed most.

3.2.1  Aircraft Types.  Several NATO nations are now looking to obtain or improve these capabilities while the aircraft industry is developing new tankers and leading-edge technology.  More tanker aircraft are being produced and developed by member nations:  the B-767 in Italy; the A-330 in the United Kingdom; the  KC-130J and KC-X in the United States; the A-400M in France, Germany, and Spain; and the MRTT in France.

3.2.2  Fuel Transfer Technology.  There are two different types of air-to-air refueling systems in use:  probe-and-drogue and the flyable boom.  These two systems are not compatible, although some booms can be adapted (on the ground only) using a Boom Drogue Adapter to be compatible with probe-equipped receivers.  Some tankers are equipped with both boom and probe-and-drogue systems and may use either on the same flight.

3.2.2.1 The boom and probe/drogue hardware technology are currently in use and will remain the standard for air-to-air refueling equipment. NATO has used both systems for decades and both are generally, but not universally and formally, standardized.  In order to formalize equipment standardization within NATO, specifications and Standardization Agreements (“STANAGs”) have been developed. If needed, new tanker aircraft could be equipped with new technologies in addition to current systems, but the current systems meet all the needs that Alliance Air Forces have expressed.

Based on the rest of the information in the document linked above (reading or skimming), can you identify different types of receiver aircraft and identify which tanker aircraft can refuel them?  Can you compare USAF and USN receiver aircraft’s refueling capability?

Here is an additional resource on aerial refueling that might be of interest.

Design of tanker aircraft refueling systems is very complicated because of the airflow around the tanker and receiver aircraft contains complex flows such as vortices.  This link shows an example of an invention designed to help solve this problem.  Like the refueling operation, flying the boom systems is a very complicated effort.  The boom operator flies the boom remotely using skills similar to playing a video game.  This video describes refueling from the aerial refueling operators point of view.  The receiver pilot during probe-and-drogue refueling must have excellent flying skill to maneuver the receiver behind the tanker.