Have you ever noticed the white lines that aircraft sometimes leave as they fly across the sky?  Sometimes they follow tightly behind a plane; other times they are spread out across the whole sky – but why are they there?  The answer is simple – it’s all about the chemistry of combustion.

NGSS: Matter and its Interactions: Construct an argument with evidence that some changes caused by heating or cooling can be reversed and some cannot. 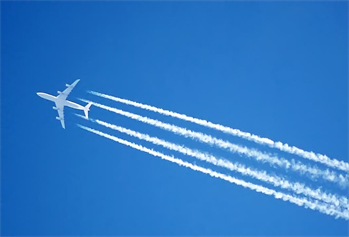 What are vapor trails? They might look like smoke, or steam, but in reality they are clouds of tiny ice crystals which come from the aircraft’s engines.  A big airline usually has two, three, or four jet engines which hang underneath the wings or sit in the tail (rear).  A jet engine is a very complicated machine which works on a simple principle: burning fuel to release energy.  When things burn, they turn into hot gases; imagine holding your hand above a campfire or a candle and feeling the hot air from the flame.  A jet engine is many times hotter than either a campfire or a candle.  One of the gases produced by burning things is steam, or water that is so hot that it turns into a gas (think of boiling water in a kettle).  However, at the heights that airplanes fly, the air is very cold.  So steam which is emitted by airplane engines freezes very quickly into tiny droplets.  Vapor trails are made of these tiny droplets – they are big plumes of steam that freeze in the sky.  For a great visualization of this phenomenon, here is a video of a man throwing a pot of boiling water into the air during a very cold winter’s day.

NGSS: Matter and its Interactions: Develop a model to describe that matter is made of particles too small to be seen.

The vapor trails produced by airplanes come from its engines.  A big airline usually has two, three, or four jet engines which hang underneath the wings or sit in the tail (rear).  A jet engine is a very complicated machine which works on a simple principle – burning fuel to release energy.  A car works on the same idea: burning gasoline produces hot gas which pushes parts of the engine to make them spin.  One can think of a car engine working by creating a series of little explosions which push on the pistons in the cylinders, which turns the crankshaft, which then (after the gear box) spins the wheels.  A jet engine is actually simpler than a car engine – in fact, it only has one moving part!  (That one part, however, is very complicated.)  Jet engines burn a fuel called kerosene, which is similar to gasoline.  The hot gas produced by burning kerosene passes through a series of fan blades, which makes them spin, just like a windmill or a pinwheel.  Then the hot gas flows out of the back of the engine at high speed, pushing the aircraft forward.  It may seem a bit counterintuitive, but one of the primary components of any exhaust gas is water, in the form of steam.  (One can see this as the fog in car exhaust on a cold day.)  Each engine on an airliner is shooting out a jet of superheated steam – but at the high altitudes that airliners fly at, the air is too cold for steam to exist for long.  As a result, the jets of steam freeze into plumes of ice crystals which we see as vapor trails, high in the sky.

NGSS: Matter and its Interactions: Develop models to describe the atomic composition of simple molecules and extended structures.

The vapor trails, or contrails, that we see behind airplanes are produced by its engines.  A jet engine works on the same basic principle as a gasoline or a diesel engine – all three of these engines burn some sort of fuel to release energy in the form of heat (they are all types of internal combustion engine).  More specifically, jet engines (like gas and diesel engines) burn hydrocarbon fuels.  The word “hydrocarbon” describes the chemical composition of the fuels, which are mainly made of hydrogen and carbon.  We use hydrocarbons as fuels because they have a lot of chemical energy which can be released by burning them.  Burning hydrocarbons results in two main chemicals in the exhaust:  carbon dioxide and steam.  You may think it odd to imagine fire producing a form of water, but steam is a product of many common combustion reactions, including those of jet fuel.  However, at the very high altitudes at which airliners fly, the temperature is too low for steam to exist.

As a result, the steam in the exhaust of an airliner’s jet engines condenses into liquid.  This is similar to the water cycle, which you may be familiar with – water vapor is cooled in the atmosphere, causing it to turn back into liquid form.  The exhaust of a jet engine has lots of other small particles in it, like soot and sulfur, which make good places for water to collect (we call these particles nucleation sites) – this makes it exceptionally easy for the water to condense into liquid form.  However, since airliners usually fly at altitudes between 25 and 35 thousand feet (5 to 7 miles, or 8 to 11 kilometers—note the temperature on the x-axis of the linked graph is in degrees Celsius), the air around them is so cold that the condensed water droplets freeze almost instantly into tiny ice crystals.  These particles are what we see when we look at a jet flying overhead – the vapor trails are clouds of tiny ice crystals which have formed in the engines’ exhausts.  You might notice that vapor trails usually start a distance back from the engines – this is because the engine exhaust is very hot and travels a short distance through the air before cooling down enough for the steam to freeze.

NGSS: Matter and its Interactions: Apply scientific principles and evidence to provide an explanation about the effects of changing the temperature or concentration of the reacting particles on the rate at which a reaction occurs.

Vapor trails are tiny particles of ice which form in the exhaust gases of an airplane’s jet engines.  Jet engines burn kerosene, a hydrocarbon somewhat similar to gasoline.  As you may have learned in chemistry, combustion reactions produce two primary products – carbon dioxide and oxygen.  Ideally, a stoichiometric reaction (one with the reacting chemicals present in just enough quantity to be used up completely in the reaction with nothing left over) produces only carbon dioxide and water – for example, look at how propane burns according to the stoichiometric reaction shown below:

Fuel in jet engines, however, burns very non-stoichiometrically; rather than having five oxygen molecules for every molecule of propane, there is enough air to give plenty of excess oxygen.  In addition, air contains nitrogen, argon, and small amounts of other gases, none of which is involved in the chemical reaction.  The biggest reason that a jet engine is designed to have plenty of excess air is that stoichiometrically burning the fuel would raise temperatures so much that the engine would melt (remember that a stoichiometric reaction has the highest possible energy output per unit mass).  In addition, jet fuel is made of kerosene, which is not a simple molecule like propane but a complicated mixture of different compounds, many of which are additives to prevent freezing and other undesirable conditions.  This means that in addition to water and carbon dioxide, the exhaust of a jet has a lot of other small particles like sulfur and nitrogen compounds.  These molecules contribute slightly to air pollution, but in this context, they also provide nucleation sites for the steam to condense.  However, at a cruising altitude of 25 to 35 thousand feet (5 to 7 miles, or 8 to 11 kilometers), the air is so cold that this condensed water freezes almost instantly into tiny crystals of ice.  These are what make up vapor trails – jets of steam that freeze into plumes of ice crystals.

You might wonder why vapor trails don’t stretch all the way across the sky.  Well, the plume of ice crystals is inside a vortex, which is a spinning mass of air.  The spinning is caused by the airplane’swingtip vortex, which is caused by the flow of the higher-pressure air underneath the wing around the wingtip toward the lower-pressure region above the wing.  (If you watch the vapor trails of a four-engine plane, you can see that the vapor trails of the two engines on one wing move outward to the wingtip and come together.)  Vortices occur in nature, too, like tornadoes and whirlpools, but eventually they always dissipate due to air friction and their inherently unstable behavior.

Friction with the air is easy to understand: the vortex exerts a frictional force on the relatively still air surrounding it, slowing down the vortex while accelerating the still air around it.  This causes the energy and the spin of the vortex to disperse slowly as the vortex expands.   Vortex instability is quite complicated, and this is a topic which researchers still study to make sure that they understand it, but the gist of it is that if you have two vortices next to one another (like in a set of contrails) they eventually pair up and destroy each other.