The SR-71 reconnaissance airplane is the fastest production airplane in the world … that we know about. The United States Air Force may have built something faster that they haven’t told anybody about. Also, there are experimental airplanes like the X-15 that went faster than the SR-71. But the SR-71 was officially the fastest airplane to be flown operationally. There are many stories about the SR-71 and its feats of speed, stealth, and altitude. This lesson recounts a few of them.

NGSS: Engineering Design: Ask questions, make observations, and gather information about a situation people want to change to define a simple problem that can be solved through the development of a new or improved object or tool.

The SR-71 “Blackbird” is the fastest airplane that was made for regular use. Even though it was a military airplane, it did not carry any guns or drop any bombs. Instead, it was a spy airplane:  it carried a camera and took pictures of things that the American government wanted to look at but could not get to otherwise. For example, during a war in the Middle East between Israel on one side and Egypt and Syria on the other side, the United States government flew SR-71 aircraft high over the battlefields to see what the opposing sides were doing. The pictures that the SR-71s took helped to end the war because it forced the two sides to move their armies away from each other as they claimed that they were doing.

The SR-71 also flew very high above the ground. No enemy was able to shoot down an SR-71 because it flew so high and so fast.  If an enemy launched a missile at an SR-71, the SR-71 would simply speed up and climb higher in the sky and outrun the missile.

Because the SR-71 flew so high, pilots had to wear full pressure suits very similar to those worn by astronauts. These suits prevented them from passing out due to hypoxia (lowered oxygen levels in the blood, caused by not having enough good air to breathe) and also helped them cope with the tremendous G-forces pressing on them when the airplane maneuvered.  Here are some pictures of pilots in their flight suits. 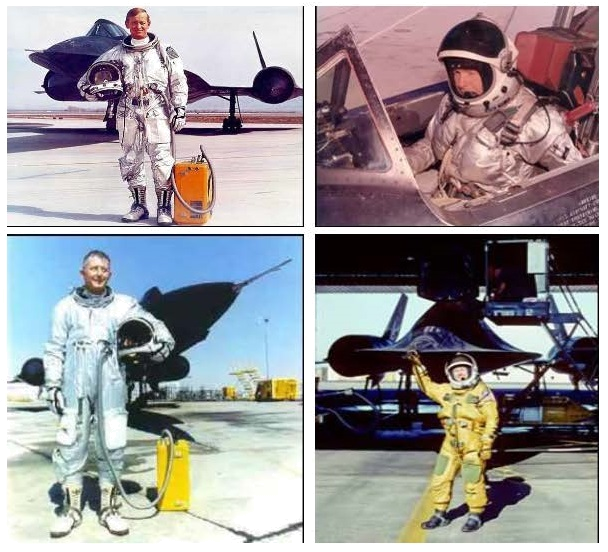 NGSS: Engineering Design: Generate and compare multiple possible solutions to a problem based on how well each is likely to meet the criteria and constraints of the problem.

When engineers designed the SR-71, they needed to solve some difficult problems.  One of the most pressing problems they had to solve was how to keep the airplane cool enough that it would work properly. Friction creates heat; you can have the students demonstrate this by rubbing their hands together and noticing how warm their palms become. The friction of the air flowing over the airplane as it flies would heat the airplane up to over 600 degrees if it had not been designed to cool itself off. For one thing, the black color of the airplane’s skin radiates heat away more efficiently than any other color; the skin is painted black for exactly this reason. In addition, the fuel tanks are directly underneath the airplane’s skin so that they will absorb the heat. The heat from the skin is absorbed into the fuel which then goes to the engines, where it is burned.

Even with these measures, the SR-71 still gets very hot. It is hot enough, in fact, that when it lands the aircraft skin is too hot to touch. The ground crew (a group of people on the ground who help operate the airplane before it takes off and after it lands) needs to bring a special step-ladder on wheels up to the airplane for the pilots to climb onto when they get out of the cockpit. The fuel tanks were designed to be sealed and leak-proof while the airplane was in flight; because the material that makes up the tanks expands when it gets hot, this meant that they leaked when the airplane was on the ground.  To fly the airplane, the ground crew would put just enough fuel into the tanks to let the SR-71 take off and fly long enough to warm up the fuel tanks. The SR-71 would then meet a tanker airplane and refuel, filling up its tanks for its mission.

These difficulties in operating the SR-71 were a main reason that the airplane was retired. There were other, simpler, cheaper ways to do what it did. As a result, the United States Air Force decided to retire the airplane and not fly it any more. The final flight of an Air Force SR-71 took place in 1990; it flew from Los Angeles to Washington in just less than one hour and five minutes. NASA continued to fly SR-71's for another decade but eventually they stopped as well.

Suggested Activity: Since the SR-71’s published top speed of 2,500 miles per hour is close to 2,400 miles per hour, your students can do a bit of “math in public” to impress people.  One hour is 3,600 seconds, which is half again of 2,400 seconds; this means that the SR-71’s published top speed is one mile every second and a half. Ask somebody how far it is from his or her home to the school (or from some place to some other place). Then ask about how long he or she thinks it would take the SR-71 to fly that far. You can calculate the answer fairly easily by taking half again the number of miles; that is the flight time in seconds. You can round the number of miles to one or two digits before multiplying. This uses both the “compatible numbers” and “rounding” areas of mathematics.

NGSS: Engineering Design: Analyze data from tests to determine similarities and differences among several design solutions to identify the best characteristics of each that can be combined into a new solution to better meet the criteria for success. 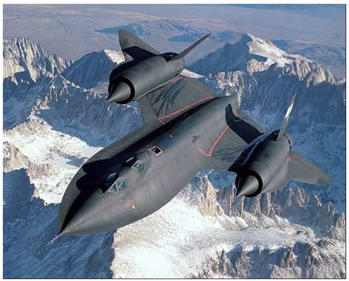 You can get a rough idea of an airplane’s design Mach number by looking at its wings. Consider a fairly slow airplane, such as one driven by propellers. Its wings stick out straight from the body. This is a good shape for airplanes that fly much slower than the speed of sound.  Next look at a faster airplane like an airliner. Airliners are designed to fly as fast as possible, so that they can deliver their passengers and cargo quickly, but still less than the speed of sound. Their wings are swept back at an angle; this lowers the drag when the airplane is flying at its cruising speed. Finally, look at the SR-71. Its wings are triangular in shape; this is called a “delta wing” after the Greek letter “delta,” which is shaped (as a capital letter) as a triangle. This is the best shape for an airplane which spends most of its time flying faster than the speed of sound.

In this equation, “Tmax” is the highest temperature possible for the air; “T∞” is the temperature of the undisturbed air (on an absolute scale like Kelvins—220 Kelvins is a good number to use); “g” (another Greek letter, pronounced “gamma”) is a thermodynamic property of air and has a value of 1.4 (strictly speaking, it is the “ratio of specific heats,” gets its numerical value from the fact that oxygen and nitrogen are diatomic molecules, and you can challenge your students to continue their studies until they can derive that value—not to mention deriving the equation itself); and “M” is the Mach number of the airplane, such as Mach 3.  Using these values (220 Kelvins, 1.4 for “g,” and Mach 3) gives a maximum temperature of 616 Kelvins or about 640 degrees Fahrenheit. That’s pretty hot!

Not all of the stories involving the SR-71 deal with its performance. How it was built is a worthy tale on its own.

When building an airplane, one wants the material to be strong, light, and cheap. It needs to be strong so that the aerodynamic forces do not rip the airplane apart; it needs to be light because, after all, the airplane is being lifted off the ground; and it needs to be cheap, so that one can afford to build the airplane.  Steel is strong and cheap, but it is heavy; aluminum is light and cheap, but it is not strong as metals go; titanium is strong and light, but it is expensive.  In addition, most of the titanium ore at the time the SR-71 was being built was in the Soviet Union.  Because the SR-71 was so important, the Air Force decided to pay the extra money and build the airplane out of titanium.  Because the Soviet Union would not sell the United States the titanium to build a spy airplane, the United States’ Central Intelligence Agency set up “front companies” in other countries which bought the titanium from the Soviet Union and resold it to the United States.

Some years ago the BBC interviewed Col. Rich Graham, a former SR-71 pilot.  He provided them with a variety of tales, from the story about buying the titanium through the fact that the airplane leaked fuel while on the ground to his use of the windshield as a makeshift oven for heating his lunch while he was in flight.

Not everything associated with the SR-71 was serious business, though.  Any group of people, and particularly military pilots, includes some wise guys.  Brian Schul, another SR-71 pilot, recounts an event in which he heard other pilots asking the control tower to verify their ground speeds and decided to show off a little.

A little mathematics yields another “wow” fact about the SR-71 that is not usually considered.  Flying at Mach 3, or 2,500 miles per hour, or 3,700 ft/sec, it could pull about two g’s in a turn.  This means that when it was turning its most quickly, the centripetal acceleration from the turn was 2 g’s or 64 ft/sec2.  Using the formula for centripetal acceleration: 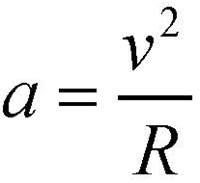 gives us a radius of the turning circle of about 210,000 feet or about 40 miles.  This means that when turning at the given rate at the given speed, the SR-71 needed a circle 80 miles wide.  If it was going faster or pulling fewer g’s, the circle needed to be larger.  Motivated students can consult the declassified SR-71 Flight Manual for further information.

May 27, 1958:  The American Vanguard SLV1 was launched but did not reach orbit because of a guidance error.  It crashed 7,500 miles downrange.