For many years, the Space Shuttle was the United States’ workhorse for ferrying astronauts and cargo into space.  While it never fulfilled its promise of being the “pickup truck” of spacecraft—rugged, cheap to operate, and versatile—it did allow NASA to carry out multiple experiments, deliver and service satellites, and contribute vastly to the construction of the International Space Station.

NGSS: Engineering Design: Ask questions, make observations, and gather information about a situation people want to change to define a simple problem that can be solved through the development of a new or improved object or tool.

NASA’s Space Transportation System used the Space Shuttle, which was a low Earth orbital spacecraft that had several reusable parts. The shuttle was made up of the orbiter, the solid rocket boosters, and the external tank. The orbiter and boosters were reusable, but the external tank was not.

The orbiter resembled the shape of an airplane, and even landed on a runway just as planes do. Up to 7 astronauts could travel in the shuttle and their science experiments or equipment they were delivering would be stored in the payload bay. NASA has diagrams of the orbiter that show exterior and interior views of the various components and also list dimensions and weight.

The ET, or external tank, was a large orange fuel tank that was attached to the underside of the orbiter. The SRBs, or solid rocket boosters, were two tall, thin rockets that launched the shuttle from Earth.

There are many videos of shuttle launches that your class may enjoy watching. This one is under 4 minutes in length. You may also wish to use the Steps to Countdown Storybook(online), or share this online article with your students. 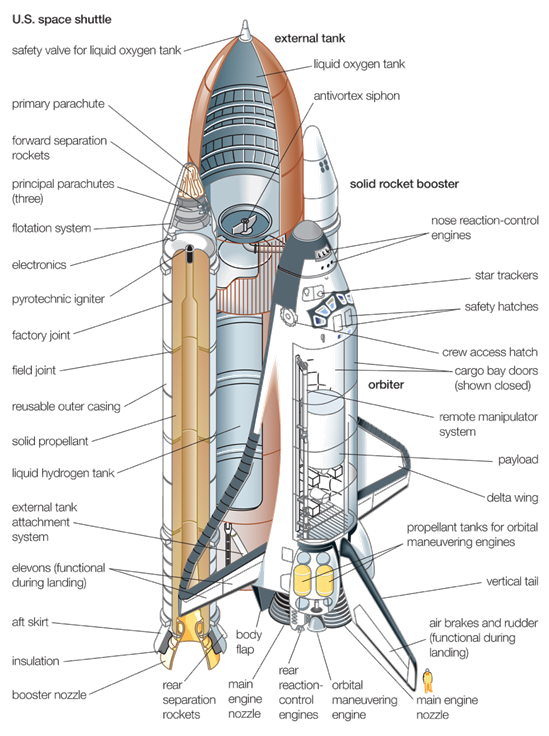 NGSS: Engineering Design: Generate and compare multiple possible solutions to a problem based on how well each is likely to meet the criteria and constraints of the problem.

Over30 years the program launched 135 missions. The crews on the missions conducted science experiments, launched and repaired satellites and the Hubble Space Telescope, and helped to assemble the International Space Station, as well as delivering astronauts and supplies to the ISS. NASA has a wonderful chart that lists the missions, the crew, dates, primary payload, and other facts.

Here are a few of the highlights from those missions:

There are posters you may view for each launch; one shows the shuttle’s crew and another shows the mission objective. There is also a webpage that will display the mission patch from each shuttle launch. You may also wish to use this online article with your students.

NGSS: Engineering Design: Analyze data from tests to determine similarities and differences among several design solutions to identify the best characteristics of each that can be combined into a new solution to better meet the criteria for success.

NASA has a web page that lists the shuttle flights involved in the International Space Station assembly. Each mission is identified and its main objective listed.

There was a much longer lead-up to the construction of the ISS than many people are aware of. The Long Duration Exposure Facility was launched in April 1984 by STS-41C and then retrieved in January 1990 by STS-32. This was a long term test program by which the NASA engineers were able to study the effects of exposure to impacts from micrometeoroids, as well as measure how low Earth orbit affected the performance of materials used in construction and estimate a timeline for degradation of those materials that would be used to build the ISS.

The modular construction of the ISS was necessary due to using the orbiter for delivery; everything had to fit within the payload bay. ESA’s Spacelab components were used in a variety of configurations on 32 different shuttle missions and NASA’s Spacehab modules were part of 22 missions, allowing astronauts to conduct many different experiments and study the effects of microgravity. Experience working with the Spacelab and Spacehab helped to further reveal the issues that astronauts and ground crews would have in loading and unloading modules, and maintenance once they were in place.

During the first Space Shuttle mission for the ISS (December 4, 1998), the Endeavor delivered the Unity module and mated it with the Zarya Control Module. The assembly continued in stages with modules, trusses, and other components delivered and attached on each mission. The first crew did not travel to the station to take up residence until October 30, 2000. Although that first crew traveled to the station on board a Soyuz spacecraft, they embarked for home on the Discovery on March 8, 2001.

The final flights of the shuttle Atlantis and Discovery were both to the ISS. The Atlantis delivered the Russian-built Mini-Research Module-1 (providing an additional docking port and cargo storage), and an Integrated Cargo Carrier on May 2010. The Permanent Multipurpose Module Leonardo and the EXPRESS Logistics Carrier 4 were delivered by Discovery in February 2011.

Students may enjoy exploring the History and Timeline of the ISS and looking at the particulars of each of the assembly missions.

The Space Shuttle caused quite a bit of controversy in its day and continues to be somewhat controversial even now.  It was based on a sound premise:  if NASA could reuse spacecraft, it would be a lot cheaper to get into space.  A common argument compared expendable launch vehicles with having to buy a new car every time you took a trip—or even went to work in the morning.

The problem was that designing and operating a reusable spacecraft turned out to be a lot more difficult than NASA thought it would be.  The environments that a spacecraft encounters on its way to and from orbit are much more severe than the environments that a car encounters on the road, or even that a four-wheel-drive vehicle encounters off the road, or that an airplane encounters during a flight.  Because flying a vehicle into space is also much more expensive than running it across the Earth’s surface or flying it through the air, it was not possible—for a vehicle that was supposed to be inexpensive—to over-engineer parts to make them twice as strong as needed.  And because the Shuttle was to be reusable, its parts had to survive multiple trips to and from space, unlike the parts from expendable rocket which had to function once and could then break up.

As the development of the Space Shuttle continued through the 1970s, delays mounted and the price continued to increase.  Officials at NASA ruled that all payloads flying into orbit would do so on Space Shuttles and cancelled other rocket development programs.  Other space science missions were also delayed or cancelled to free up funds to pay for the Space Shuttle development.  Speaking of the cancelled missions, an outside observer mentioned “the slaughter of the innocents” at NASA.  (You may wish to have your students read the article, then share their own views on whether this quote is an accurate reflection of the facts - and support their opinion with details from the text.)

For example, earlier spacecraft that had to survive re-entry used ablative (pronounced “a-BLAY-tiv”) heat shields—heat shields that would burn off or evaporate partly, carrying the worst of the heat off with the gases.  Since the Space Shuttle was to be reusable, it needed a heat shield that could also be reused.  The solution was to coat the underside of the orbiter with ceramic tiles.  While this protected the orbiter, it was also very expensive to make the tiles, put the tiles in place, and ensure after each mission that the tiles had not broken and were still in working order.

The ceramic tiles that protected the underside of the orbiter provided excellent thermal insulation; a person could lay a tile on his hand, heat the other side of the tile with a blowtorch, and not feel any warmth coming through the tile.  But the tile was exceedingly weak, structurally; if the same tile were laid on a desk with its sides supported by pencils, a person could drop a two-inch-long pencil eraser from one foot high onto the middle of the tile and it would split in two.  A worker on the Space Shuttle program called this “the Pink Pearl test.”  The weakness of these tiles was a key factor in the loss of the Columbia and seven astronauts in February 2003.

The Space Shuttle helped in a roundabout way to win the Cold War between the United States and the Soviet Union.  As the Americans developed the Space Shuttle, the Soviets came to see it as a military threat and decided that they needed a shuttle of their own.  They developed a Space-Shuttle-like vehicle that they named “Buran.”  But it was just as expensive for the Soviets to develop Buran as it had been for the Americans to develop the Shuttle, and the Soviets could not afford the expense.  The money spent developing Buran essentially bankrupted the Soviet space program and helped bring down the Soviet regime in 1991. After a single unmanned test flight in November 1988, it was never flown again.

April 2:  Seven astronauts were selected from among 110 candidates for the American Project Mercury. The astronauts were presented to the world in this photo on April 9.