Iteration and Chaos in Mathematics

Iteration—doing the same thing over and over again—sounds like a very boring proposition.  But it can produce results of great beauty and of literally infinite complexity.  The mathematical field of chaos theory, which came into vogue in the 1980s, is based on repeating the same operation infinitely many times, each time using the output of the previous operation as input to the next operation.  This lesson emphasizes the simplicity of iterative processes and the beauty and grandeur of the results that they give.

We learn to count in one-to-one correspondence in kindergarten, but that is not the only way to count. We also learn skip counting, to count by 2s or 5s or 10s, for instance. But there are even more interesting ways to count. The Fibonacci Sequence is one of those ways. In this way of counting we start with “0, 1” and then each number after that is the sum of the two numbers that precede it. So the sequence begins with “0, 1, 1, 2, 3, 5, 8, 13…” and can go on to infinity.

The number series was published in a book called Liber Abaci by a man known as Fibonacci in the 13th century, but it had been known even before then. Since he wrote about it, the sequence is named for him. The Fibonacci Spiral can be built from shapes based on numbers in the sequence, such as using tiles to fill a space in increasing squares, then tracing outward from that first tile and around the outer corners of each successively larger square area.

Think of the places in nature where such spirals exist - in the curves of seashells, the shape of galaxies, the arrangement of florets on a pinecone, or the petals on a flower - and those are just a few.

To introduce the idea that math concepts really do apply to real life in all sorts of unexpected ways, you might like to read The Math Curse by Jon Sceiszka and Lane Smith to your class. Then see if they can find similar examples throughout the day.

For your own inspiration, consider watching this TED Talk on The Magic of Fibonaccai Numbers.

If you start with another counting number, you will go through a different sequence of numbers, but eventually you will wind up at the same cycle:  4, 2, 1, 4, 2, 1, and so on.

Question:  Is there a number that you can start at that does NOT land you in that same cycle?  Nobody knows.  Literally, nobody knows.  This is an unsolved problem in mathematics.  The Collatz Conjecture states that if you repeat this operation enough times starting with any number, you will eventually end up at that cycle, but it is just a conjecture.  Nobody has proven it right; nobody has proven it wrong.  A great mathematician, Paul Erdös (pronounced “Air-dish”), once said that “Mathematics is not yet ready for such problems.”  John Horton Conway, another great mathematician, considered a more general version of the problem and proved that the more general version cannot be proven or disproven.  If nothing else, this shows just how close at hand in mathematics the unknown can lurk.

If your students want to try their hands at generating sequences starting from various numbers, feel free to encourage them.  It has been demonstrated that a sequence starting with any number less than about 5.48×1018 will end at 1, so there is not much chance that your students will find a counterexample.  You may also want to encourage your students to continue their studies in mathematics until they can analyze this problem more generally.

How long is this curve? Well, if your first straight line was one foot long, then your second figure (with four line segments, each one third of a foot long) was 4/3 feet long. Then your third figure (with 16 line segments, each one ninth of a foot long) was 16/9 feet long. Each time you take out the middle third of your line segment and replace it with two more just like it, you are multiplying the length of the curve by 4/3. If you do this infinitely many times, then the length of the curve becomes

which, after infinitely many multiplications, is infinitely large.  Think about that:  a curve of infinite length is contained between two endpoints a foot apart.

Fractals have a strange beauty about them.  A possible reason for this is that in many ways, they mirror nature and nature is intrinsically beautiful.  A tree trunk splits up into limbs, which split into smaller branches, which split into twigs, in the same way that a fractal repeats itself on ever smaller scales.  Waves in the ocean form into larger swells and have smaller wavelets on top of them.  Clouds have large billows whose surfaces have smaller puffs which are made up of ever smaller details.  Fractals imitate these repetitions on ever-smaller scales, extending the repetition down to infinitesimal scales.

Mathematicians have generalized the Collatz sequence to consider dividing by a general number in the one case and multiplying by another general number and rounding up to the next multiple of the first number in the second case. The sequences created by these more general rules form various cycles.

It defines a parabola which passes through the origin and has another zero at “x = a”. We can use it to generate a sequence of numbers: 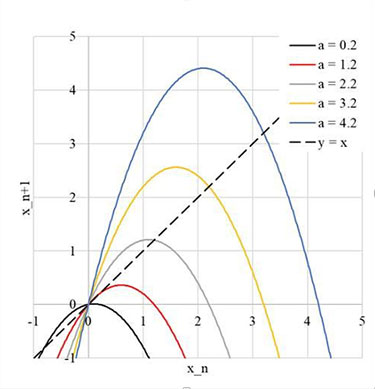 This is called the “Discrete Logistic Equation” and is used in modeling the growth of a population with limited resources.  The factor “a” is the population’s growth rate and the quadratic term models the exhaustion of, for example, the food supply if the population is too great.  (There is a continuous Logistic Equation, but its solution involves calculus and it is best reserved for college students.)  One can graph the curves generated by various values of “a”, as is shown on the right.  Creating the sequence using the formula can be thought of using the graph as finding a point on the curve for the appropriate value of “a” (this is equivalent to using the formula to calculate xn+1), then moving horizontally to the “y = x” line (this moves xn+1 to become the next xn), then moving vertically to the curve again (to calculate the next xn+1).  On a graph, one generates something similar to the figure below. (*** Fix the wording as the pagination adjusts ***)

The obvious question is, what will happen to xn as “n” becomes arbitrarily large, if you start with x0 somewhere between 0 and a? (If you start the sequence with x0 outside that interval and with a positive a, the next term is negative and the sequence goes off to negative infinity. You can invite your students to figure out what happens if a is negative.)

There are four possibilities. 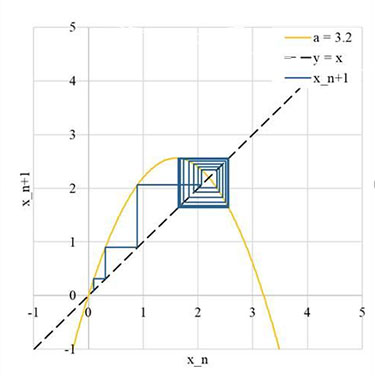 The first possibility is that xn will go toward negative infinity. If a is greater than 4, the top of the parabola is larger than a and the next horizontal move to the “y = x” line gives you a negative value for xn+1 on the next iteration. You can specify initial values for x0 which will prevent this from happening (such as x0 = a – 1), but most initial values for the sequence will cause the values to go toward negative infinity.

The third possibility is more interesting: the sequence will converge to what is called an “n-cycle.” In an “n-cycle,” the value of x jumps back and forth in a repeating set of n different values. (The “n” here is different from the “n” that denotes the position of the term in the sequence.) This possibility is shown in the graph above, showing that for a = 3.2 the sequence xn converges to a 2-cycle. As a increases beyond three, the sequence converges first to a 2-cycle, then to a 4-cycle, then to an 8-cycle, and so on. 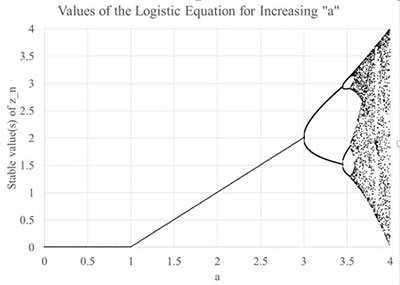 The fourth possibility is the most interesting: xn may jump around between an upper limit and a lower limit and never repeat itself. As a increases, the length of the n-cycle keeps doubling until eventually around a = 3.57 it becomes infinite. Above a = 3.57, for a random initial value x0, the numbers xn never repeat themselves but never go outside the interval from 0 to a. This behavior is called “chaos” and was first investigated by Mitch Feigenbaum for the Discrete Logistic Equation in the 1970s. If you have students with a mathematical bent, they write a program (or generate a spreadsheet) quite easily to model the behavior of this sequence.  Failing that, Wolfram MathWorld has two very nifty demonstrations of how the sequence behaves for different values of “a”. The figure to the right shows the values of xn to which the sequence converges as “a” increases.

We have three free parameters here: A, B, and C. We scale and offset our “x” values (where we will specify the values of “p” and “q” later):

Putting this into our equation gives

(note that being a quadratic, the latter equation doesn’t always have a solution) to get

where “a = B – 2 q”.  Our three free parameters (A, B, and C) have been reduced to the single parameter “a”.  In plain English, if somebody specifies A, B, and C, you can often calculate a “p” and “q” to reduce the equation to the form that was analyzed.  The behavior of the equation in cases in which the quadratic equation for q does not have a solution is left as an exercise for your motivated students.