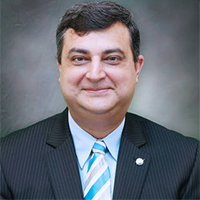 Sultan is the NASA co-lead on the NASA/FAA Research Transition Teams, which are organized to enable efficient and effective transition of NASA research into FAA implementation roadmaps.

He is also the NASA liaison to the multiagency NextGen Interagency Planning Office, and leads the program’s international collaboration activities.

Sultan has 20 years of professional experience in aerospace and air traffic management research and development.

Previously, Sultan was a NASA liaison to the Joint Planning and Development Office in the ongoing development of NextGen, where he led the development of NextGen operational improvements.  He also served as the Software Configuration, Release, and Verification and Validation Manager for the Terminal Radar Approach Control automation system at NASA’s Ames Research Center in California. There he was responsible for gaining FAA certification for NASA prototype systems in operational field trials.