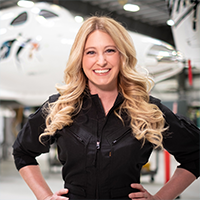 Beth Moses is an American astronaut, aerospace engineer and Chief Astronaut Instructor at Virgin Galactic, a public spaceflight corporation which is developing suborbital space tourism. Beth leads Virgin Galactic’s cabin test program and will train all SpaceShipTwo cabin astronauts for their missions. On February 22, 2019 Moses launched to space with pilots David Mackay and Michael Masucci and performed the first-ever test of SpaceShipTwo’s customer cabin. During her test she became the first human to unstrap and float weightless in a stationary spacecraft, hovering completely still inside a spacecraft as it coasted to a stop above the Earth. Ms. Moses is also the world’s first female commercial astronaut and the recipient of FAA commercial astronaut wings #007, having been the seventh person in history to serve on the flight crew of a commercial spacecraft.

Previously, Ms. Moses worked at NASA’s Johnson Space Center where she served as the Extravehicular Activity System Manager for the International Space Station from design through on-orbit construction. Ms. Moses received her Bachelor’s and Master’s degrees in Aeronautical and Astronautical Engineering from Purdue University.