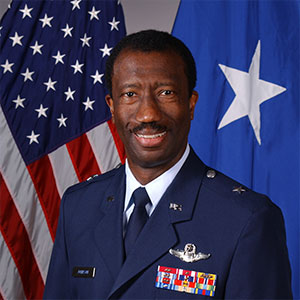 Leon Johnson retired from the U.S. Air Force with the rank of brigadier general after 33 years of service.  During his AF career, General Johnson commanded a fighter squadron, fighter group, was the Vice Commander of 10th Air Force at the Joint Reserve Base in Ft. Worth, TX and served as Mobilization Assistant to the Assistant Secretary of the Air Force.

A command pilot with over 3500 hours of military flying time in the T-37 trainer, A-37 and A-10 fighter aircraft including missions over Bosnia in support of Operation Deny Flight.  Following the events of 9/11, the general served as a Director of the Air Force Crisis Action Team in the Pentagon.

In 2009 General Johnson was selected as a Trustee of the U.S. Air Force Academy Falcon Foundation.

In 2011 General Johnson was awarded a Doctorate in Humane Letters by Tuskegee University.

In 2013 the General concluded a six-year appointment as a member of the U.S. National Academies of Science and Engineering (NASE), Naval Studies Board.  He continues to serve on study committees for NASE.

General Johnson worked at the United Parcel Service Airlines for 20 years.  He was the chief pilot responsible for all air operations in the western half of the United States, North and South Pacific, all of Asia and the Middle East.  He was also a human resources manager responsible for employee relations, work force development and employment for the UPS Airline. He has more 4000 hours of civilian flight time in heavy jets.