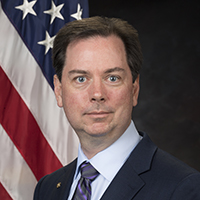 Dr. Bryan Barmore has a PhD in nuclear physics from the College of William and Mary and a BS inphysics from Ohio University. He is the Deputy Project Manager for Technology for NASA’s Air TrafficManagement – Exploration project where he leads the technology development for future airspaceconcepts enabling safe and efficient access to the airspace for all users. Previously he was a research engineer in NASA Langley’s Crew Systems and Aviation Operations Branch. From 2002 - 2015 he led NASA’s Interval Management research team. Bryan was active in the development of international standards for Interval Management including the publication of multiple RTCA and EUROCAE documents. He led the development of the FAA’s Interval Management concept of operations. From2015-2017, Bryan led the Langley’s Advanced Four-Dimensional Trajectory (4DT) research team in NASA’s SMART NAS for Efficient Trajectory-Based Operations project.

Dr. Barmore’s research interest include improving the operational efficiency and safety of air transportation for existing and new users and operations and enabling new operational paradigms to coexist with existing airspace users. Bryan continues to work to empower users to have a more activerole in airspace management through digital information exchange and distributed control paradigms.

Prior to coming to NASA, Bryan was a research fellow at the Joint Institute for Heavy Ion Research at Oak Ridge National Laboratory where he studied the structure of extreme nuclei. Dr. Barmore was amember of the team that was awarded the 2007 Robert J. Collier Trophy for the development of ADS-Band ADS-B applications. He is the recipient of the NASA Exception Achievement Medal and multiple RTCA and NASA awards. He has over 40 publications in ATM and physics research.