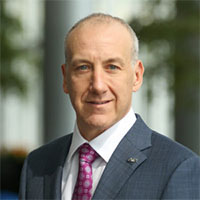 David Silver is the Vice President for Civil Aviation at the Aerospace Industries
Association (AIA). In this role, he uses his expertise in aviation certification, safety, and
emerging technologies to collaborate with AIA members and advance public policies
and positions beneficial to the entire industry and the United States.

David represents AIA on a number of boards and committees, including the European
Union Aviation Safety Agency Stakeholder Advisory Board and the Commercial Aviation
Safety Team. He was also nominated by Secretary of Transportation Elaine Chao to
serve on the U.S. Drone Advisory committee.

Silver joined AIA with over 20 years of experience in aviation, most recently serving as
the Director of Engineering &amp; Regulatory Affairs for the Boeing Company in Washington.

D.C., where he worked extensively with both regulatory and legislative committee
leadership. He developed an array of experience in working with a variety of
international organizations involved in certification and validation programs.

Silver also served as the 787-8 Deputy Fleet Chief for the introduction of aircraft into
commercial operations. Silver worked with airline customers, regulators, and airplane
program chief engineers on model-specific technical and safety issues affecting the in-
service fleet to increase reliability and ensure smooth operations for the airlines. Silver
also has vast experience working Airplane Systems for airplane programs such as the
777 and 767.

Silver served for 22 years in the Army National Guard as an Engineer Officer, with
successive leadership roles culminating in Battalion Command and Assistant G3 for
Washington State. Silver received the Legion of Merit and retired as a Lieutenant
Colonel in 2014.