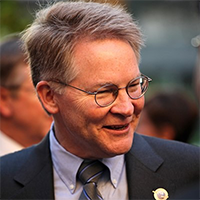 Thompson served as president and chief executive officer of Orbital ATK until 2018. Under his leadership, Orbital ATK carried out more than 1,000 rocket launches and satellite missions over a 36-year period. During that time, the company grew from a start-up to a NYSE-listed public company with an enterprise value of more than $9 billion.

In 1982, Thompson co-founded Orbital Sciences Corporation (one of Orbital ATK’s main predecessors), serving as chairman, president, and chief executive officer. Before co-founding Orbital, Thompson was special assistant to the president of Hughes Aircraft Company’s Missile Systems Group and was a project manager and engineer at NASA’s Marshall Space Flight Center. As a college student, he worked on the first Mars landing missions at California Institute of Technology’s (Caltech) Jet Propulsion Laboratory and on space shuttle projects at NASA’s Langley Research Center and Johnson Space Center.

Thompson was awarded the National Medal of Technology, was honored as Virginia’s Industrialist of the Year, and was named High-Technology Entrepreneur of the Year by Inc. magazine. Also, he received the National Air and Space Museum Trophy from the Smithsonian Institution and was honored with the von Karman International Wings Award by the Aerospace Historical Society. He was also selected as Satellite Executive of the Year, was recognized with the Arthur C. Clarke Lifetime Achievement Award, received a lifetime achievement award from Aviation Week and Space Technology magazine, and was presented with the World Technology Award for Space by The Economist magazine.

Thompson is an Honorary Fellow of the American Institute of Aeronautics and Astronautics (AIAA); a Fellow of the American Astronautical Society and the Royal Aeronautical Society; and a member of the U.S. National Academy of Engineering and the International Academy of Astronautics. He was AIAA’s president for 2009-2010. Thompson also serves as a member of the Boards of Trustees of Caltech, the Carnegie Institution for Science, and the Hertz Foundation, as well as the Astronomy Advisory Council at Princeton University.