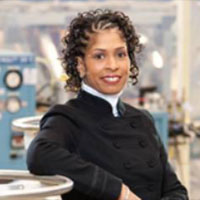 During her 28+ year tenure with NASA, Dr. Aprille Joy Ericsson has held numerous positions. In 2017, Dr. Ericsson assumed the position of New Business Lead (NBL) (and Acting Chief Technologist) for the NASA GSFC Instrument Systems and Technology Division. In this role she seeks to foster government partnerships that enables industry and small businesses to collaborate with universities, to solve strategic R&D challenges faced by United States government agencies.

In her role as NBL, she serves as engineering representative on the Astrophysics, Heliophysics, Planetary and Earth Science and Cross-Cutting Technology Lines of Business strategy teams. Just prior to that position, she served as the Project Manager for a proposed Astrophysics mid-sized Class Explorer, called STAR-X. Prior to that proposal development, Dr. Ericsson served as the NASA GSFC Program Manager for Small Business and Innovative Research in the Innovative Technology Partnerships Office. Formerly, she served as the Deputy to the Chief Technologist for the Engineering and Technology Directorate with a focus on cubesat and smallsat mission development. She has also served at NASA HQs as a Program Executive (PE) for Earth Science, and a Business Executive for Space Science.

For 10 years, Dr. Ericsson was an Instrument Project Manager (IPM) leading spaceflight mission teams and instruments proposal developments that include: the Near-Infrared Spectrograph on the James Webb Space Telescope; the Project Engineer for the Lunar Orbiter Laser Altimeter on the Lunar Reconnaissance Orbiter (launched 2009); and, Instrument Proposal Manager for the SCIM Mars mission. For 3.5 years she served as the Acting IPM and Deputy IPM for ICESat-2’s (launched 2018) sole instrument, the Advanced Topographic Laser Altimeter System (ATLAS), a $500M LIDAR instrument which continues to provide important observations of ice- sheet elevation change, sea-ice freeboard, and vegetation canopy height begun by ICESat (-I), on which Dr. Ericsson was PE in 2003. Dr. Ericsson first joined GSFC as an Attitude Control Systems Analyst, where she developed practical control methods, and analyzed structural dynamics for several spacecraft missions and concepts.

She has served as an Adjunct Faculty member at several Universities. Currently, she sits on Academic boards at the National Academies (Board of Higher Education and Workforce), MIT (Industry Advisory Council for Minority Education), Chair of the Advisory Board for Howard University (HU) Department of Mechanical Engineering and previously as a HU Trustee and Blacks at MIT. She is Co-Lead Advisor for the Dynamic Mathematical Visionaries NSBE Jr. Chapter. Dr. Ericsson has served as an MIT Education counselor for the almost 15 years. She has also been a proposal reviewer for NSF and NASA.