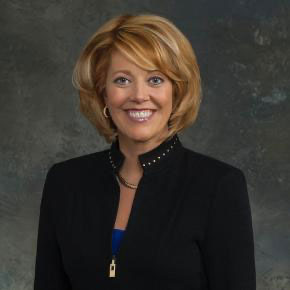 Erin Moseley is the Vice President of Strategy and Business Development for Lockheed Martin Aeronautics Company. She is responsible for domestic and international pursuits, and she leads new business captures for the Aeronautics portfolio, including fifth-generation tactical aircraft, air mobility, unmanned and intelligence/surveillance/reconnaissance platforms, and Advanced Development Programs at Lockheed Martin’s Skunk Works®. She was named to her current position in December 2018.

Previously, Ms. Moseley was Senior Partner at Inglee, Sauer, Moseley (ISM) Strategies. Prior to joining ISM in 2014, she served as President of Support Solutions at BAE Systems, Inc., a $3.2 billion sector of the company. In this role, she was responsible for sustainment, upgrades and life extension to defense products and services, including engineering, systems integration, ship repair, and readiness and sustainment for military and commercial customers. She previously served as Senior Vice President for Government Relations at BAE Systems.

She was the Vice President of Sensors and Electronic Systems at Lockheed Martin from 2004- 2006, where she supported multiple business areas, ranging from systems integration and sea- based platforms, missile defense, sensors and electronic systems, to simulation and training services and systems. She also led various teams at General Dynamics from 1998-2004, concluding her work there as Staff Vice President of Government Relations, Combat Systems.

Prior to joining the defense industry, Ms. Moseley served in the U.S. Government as the Special Advisor to the Deputy Director of the U.S. Arms Control and Disarmament Agency.

She holds bachelor’s degrees in International Relations and Political Science from Azusa Pacific University, and a master’s degree in National Security Studies from Georgetown University. She earned a certificate in Nuclear Deterrence from Harvard University.

She and her husband, Chase, reside in Fort Worth, Texas.