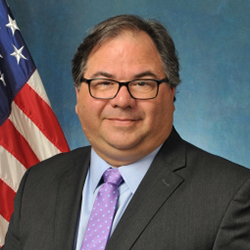 Dr. George J. Foster is the Distinguished Engineer for Combat Control, resident at the Naval Surface Warfare Center, Dahlgren Division.  Entering the Senior Professional (ST) cadre of the Federal Executive Service in June 2018, he serves as the Navy's national and international leader in the development of technologies and applications for Combat Control, especially the areas of Intelligent Automation and Networked Warfare. He also serves as the expert for Combat Systems at the Office of Naval Research (ONR).

Dr. Foster has 30 years of engineering and leadership experience in the research, development, test, and evaluation of System Architecture, Combat Control and Electronic Warfare Systems, both in government and private industry.  Starting his career with the U.S. Navy in 1992 as an engineer implementing functional upgrades to the Aegis Weapons Control System (WCS) and conducting research in new tracking and missile guidance algorithms for Aegis Anti-Air Warfare and Ballistic Missile Defense mission areas, he became the Chief Engineer for WCS and was instrumental in fielding of the Aegis Leap Interceptor program and the transition to open system architecture using commercial computing plants.

In 2003, he joined Computer Sciences Corporation (CSC) to work as a Fellow and Chief Scientist for CSC where he developed radar, weapons control, system architecture and display system solutions to counter advanced threats.  After the successful demonstration of the Aegis Open Architecture program, Dr. Foster returned to the Navy in 2010 to facilitate the integration of the SM-6 missile into Aegis.

In 2013, Dr. Foster led efforts to integrate Electronic Warfare into the combat system through the re-architecture of the AN/SLQ-32(V)6 Electronic Warfare System, leveraging the efforts of multiple Future Naval Capability research programs to develop an open system that allows for easier integration of new decoys and effectors.  He advanced this effort further in 2016 when he took leadership of the Surface Navy’s effort in force-level engagement coordination.

Dr. Foster earned a Bachelor and Master of Science in Electrical Engineering from Virginia Polytechnic Institute and State University (Virginia Tech).  He earned a Doctor of Philosophy in Electrical Engineering from The Catholic University of America.  He has dozens of technical publications to his credit.  Dr. Foster's professional activities include membership in the Association of Old Crows and the Institute of Electrical and Electronic Engineers, where he has served as Technical Co-Chair of the International Systems Conference.  He maintains his academic ties by serving on doctoral committees at Catholic University and Old Dominion University and teaching at Virginia Tech, University of Mary Washington and the Massachusetts Institute of Technology.  Dr. Foster is DAWIA SPRDE Level 3 certified and a member of the Defense Acquisition Corps.