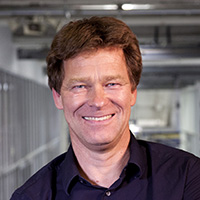 Dr. Hans Koenigsmann leads the Build and Flight Reliability Team at SpaceX. In this role, he is the executive leader of SpaceX's quality engineering and process development teams. He also oversees the launch readiness process during launch campaigns. He provides an independent assessment of launch risks, identifying and resolving anomalies during integration and launch itself. The Reliability teams resolve all major anomalies, evaluate and mitigate risk and perform hazard analyses and other functions on the vehicle system level.

He has more than 25 years of experience designing, developing and building complex avionics and guidance, navigation and control (GNC) systems for launch vehicles and satellites. As a member of SpaceX from the company's inception in 2002, Hans built up the avionics, software and GNC departments and developed the launch readiness process currently in use during each launch campaign. He also designed the SpaceX risk mitigation process and initiated the risk database, establishing a similar process for system-level changes to the vehicle and ground systems. Dr. Koenigsmann was the Chief Avionics Architect of the Falcon 1 and early Falcon 9 efforts, and he is a key member of the small, core group of SpaceX engineers responsible for operating these vehicles on the launch pad and in orbit. He served as Launch Chief Engineer for the last 3 Falcon 1 missions and for most Falcon 9 flights to date.

Hans' experience includes the development of two suborbital and two orbital launchers, as well as several satellite projects and attitude control systems. He served as head of the Space Technology Division of Germany's ZARM at the University of Bremen, where he was responsible for the development and operation of the satellite BREM-SAT. Following this experience, Hans worked for Microcosm as Chief Scientist and Flight Systems Manager for their suborbital vehicles.

AboutSpaceX
SpaceX designs, manufactures, and launches advanced rockets and spacecraft. The company was founded in 2002 by Elon Musk to revolutionize space technology, with the ultimate goal of enabling people to live on other planets. Today, SpaceX is advancing the boundaries of space technology through its Falcon launch vehicles and Dragon spacecraft. The company has more than 6,000 employees across locations, including its headquarters in Hawthorne, CA; launch facilities at Cape Canaveral Air Force Station, FL; Kennedy Space Center, FL; and Vandenberg Air Force Base, CA; a rocket development facility in McGregor, TX; and offices in Redmond, WA; Irvine, CA; Houston, TX; Chantilly, VA; and Washington, DC. SpaceX has suppliers in all 50 states. For more information, visit www.spacex.com.