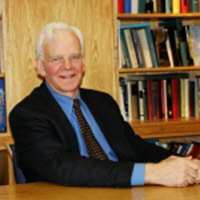 Jim Anderson is the Philip S. Weld Professor in the Departments of Chemistry and Chemical Biology, Earth and Planetary Sciences and the School of Engineering and Applied Sciences, Harvard University. He was Chairman, Department of Chemistry and Chemical Biology, Harvard University, 1998–2001. He was elected to the National Academy of Sciences in 1992, the American Philosophical Society in 1998, the American Academy of Arts and Sciences in 1985, a Fellow of the American Association for the Advancement of Science in 1986, a Fellow of the American Geophysical Union in 1989.

He received the 2019 Aluminus Summa Laude Dignatus from the University of Washington, the 2017 Lichtenberg Medal from the Göttingen Academy of Sciences and Humanities, the 2016 Polanyi Medal of the British Royal Academy of Chemistry for work on free radical kinetics, the 2016 Benton Medal for Public Service by the University of Chicago, and the 2012 Smithsonian American Ingenuity Award in the Physical Sciences. He received the E.O. Lawrence Award in Environmental Science and Technology; the American Chemical Society’s Gustavus John Esselen Award for Chemistry in the Public Interest; the United Nations Vienna Convention Award for Protection of the Ozone Layer; Harvard University’s Ledlie Prize for Most Valuable Contribution to Science by a Member of the Faculty; the American Chemical Society’s National Award for Creative Advances in Environmental Science and Technology. He has testified on numerous occasions before both Senate and House committees on national energy and climate issues.

The Anderson research group addresses four domains at the intersection of the physical sciences with global climate change: (1) chemical catalysis sustained by free radical chain reactions that dictate the macroscopic rate of chemical transformation in Earth’s stratosphere and troposphere; (2) mechanistic links between chemistry, radiation, and dynamics in the atmosphere that control climate; (3) the design and development of new climate observing systems including solar powered stratospheric aircraft and the StratoCruiser Flight System; and (4) chemical reactivity viewed from the microscopic perspective of electron structure, molecular orbitals and reactivities of radical-radical and radical-molecule systems.