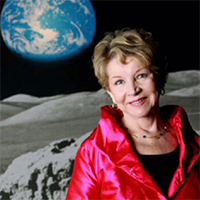 June Scobee Rodgers, Ph.D. FOUNDING CHAIR OF CHALLENGER CENTER is the widow of Challenger Space Shuttle Commander Richard “Dick Scobee.” In memory of the “Teacher in Space” mission, June founded Challenger Center for Space Science Education to foster a new generation of “star challengers” – young people who will reach for the stars no matter their circumstances.

Each year, Challenger Learning Centers around the globe engage hundreds of thousands of students and tens of thousands of teachers in dynamic, hands-on exploration and discovery opportunities that strengthen their knowledge in science, technology, engineering, and math (STEM).

While best known for her tireless efforts on behalf of Challenger Center, June has also gained attention for her work as an author. The “Star Challengers” science adventure books for young readers were created to spark student interest in space and careers in science, engineering and technology.

“Silver Linings” (published, 2011) is the expanded story of her book about the triumph and legacy of the Challenger 7. More than the story of a ragged teenager who struggles to overcome adversity, it presents a historical overview of America’s leadership in space exploration and discovery.

June has been nationally recognized and honored with countless awards during her professional career, including the National Eagle Award, the Women’s International Center’s Living Legacy Award, the Spirit of Volunteerism, the National Space Club Educator Award, and the National Award for Excellence in Leadership. In 2015, June received the distinguished Alan Shepard Technology in Education Award, and in 2019, she received the “Apollo 50th Education Award,” saluting her pioneering work and dedication to motivate our future Science, Technology, Engineering, and Mathematics workforce.
June has appeared on numerous national television news and talk shows promoting innovative educational partnerships that help communities prepare to meet our nation’s education goals. She has been interviewed on CNN and Fox News, Good Morning America, Dateline NBC, 60 Minutes, and the recent Netflix Challenger story. Her story was also featured in various magazines including Woman’s Day, LIFE, Southern Living and Guideposts magazines.

An active and prominent leader in education throughout her professional life, June holds a Ph.D. from Texas A&M University and an Honorary Doctor of Science Degree from the University of Leicester, England. She has been a classroom teacher and university professor, served as a consultant to local, state and federal education agencies, and become a nationally recognized advocate for the advancement of science and math education. She is married to retired Lt. Gen Don Rodgers, and together they have three married children and nine grandchildren.