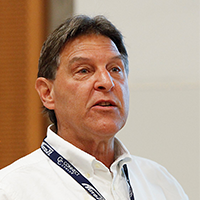 A leadership professional who has a wide range of experience in: Offshore Wind Development, First of A Kind Solutions, Coaching for Performance, Environmental & Regulatory Engagement, and Avoiding Failures.  Exceptional outcomes have been achieved for organizations such as the U.S. Department of Energy, U.S. Department of Defense, Ford Motor Company, NASA, and Global Asset Management. Each success resulted from embracing organizational goals, building the team, asking the right questions, gathering the facts, and coaching the team to success.  Some of these include: securing $65 million from the U.S. Department of Energy for one of two Advanced Technology Offshore Wind Demonstration Projects; attracting $10 million private investment for the first freshwater offshore wind project in North America; and developing a highly profitable Deep Learning Neural Network for trading 30 Year U.S. Treasury Bonds.

He received his Bachelors of Interdisciplinary Engineering, Masters in Nuclear Engineering and his Ph.D. from Purdue University, where he developed several new heat transfer models for Fusion Reactors.  This research included experimental research, theoretical modeling, and empirical simulations to explain and predict liquid metal heat transfer under the influence of a magnetic field.  Over the course of his business career he has led numerous companies including start-ups as well as established businesses. His current role is as Principal of Holt Murphy Advisors, Ltd, a consulting group focused on failure prevention for industrial and offshore wind projects.  Off the clock, he was Team Engineer for KR Powerboat Racing, winner of the 1992 Offshore Profession Tour, as well as Head Coach for two Division I University swimming teams.  He is a lifelong boater and member of Cleveland Underwater Explorers (CLUE), who have discovered more than 30 wrecks in Lake Erie.