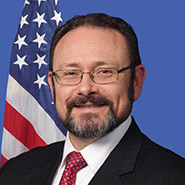 Dr. Michael Romanowski is the Federal Aviation Administration's (FAA) Director of Policy & Innovation in the Aircraft Certification (AIR) Service.  In this role, he provides executive direction in support of aerospace innovation, by seeking out the best solutions for the organization that will drive outcomes, anticipating key changes in the market, and mobilizing teams around the change to develop a clear pathway to certification for all aerospace products. He also provides direction in the development and maintenance of AIR regulations, guidance and directives, research and development activities for AIR, and maintains and manages the Chief Scientific and Technical Advisor program, as well as fleet safety studies and evaluation of overall fleet safety needs.

Dr. Romanowski previously served as the Director for Commercial Space Integration in the Office of Commercial Space Transportation.  In this role he provided executive leadership for the safety and environmental regulation and oversight of commercial spaceports, launches and reentries, and the integration of these operations within the National Air Space.

Before joining the Office of Commercial Space Transportation he served in the White House Office of Science and Technology Policy, where he was the aviation advisor to the first-ever Chief Technology Officer of the United States.  He also served as the FAA representative to the White House’s National Science and Technology Council and its Committee on Technology.  In these roles, he focused on developing and advancing strategies and policies across the federal government and with the private sector that promoted innovation, and accelerating the benefits of federal investments in aviation and aeronautics.

Prior to his White House assignment, Dr. Romanowski was the FAA Director of NextGen Integration and Implementation with responsibility for ensuring the integrated application, planning, programming, budgeting, and execution of FAA’s NextGen air traffic management modernization portfolio.

Before joining FAA, he was Vice President of Civil Aviation at the Aerospace Industries Association, where he headed all its activities on aviation-related issues and policy, including the areas of research and development, aviation infrastructure, and safety and security.  At the same time, he was also the President of the National Center for Advanced Technologies, a non-profit corporation that assists the federal government by developing cooperative links between government, academia, and business on policy issues, with a focus on civil and military aerospace research and development.  Dr. Romanowski also held position as the Director of Product Safety, Certification and Airworthiness at Sikorsky Aircraft with responsibilities spanning Sikorsky's entire product line.  Before joining Sikorsky, he held a similar role at Pratt and Whitney.