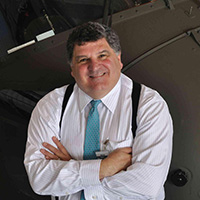 Nick Lappos is Lockheed Martin Senior Fellow, for Rotary and Mission Systems, where he is responsible for the Sikorsky Technical Fellow community and the introduction of advanced technologies into new and existing products. Lappos began his Aerospace career in the US Army, where he served a combat tour as an attack helicopter pilot in Vietnam. He joined at Sikorsky Aircraft in 1973. Through 2005 and then again from 2011 to present, he has served in a variety of roles at Sikorsky, including as program director for the S-92®helicopter during its development and certification. Under his leadership, the program earned the Robert J. Collier Trophy. Lappos also served as director of Test Engineering and as assistant chief and chief Research and Development test pilot, logging more than 7,500 hours of flight time in over 70 different types of helicopters. During his Sikorsky career, Lappos has participated in the development of aircraft such as the S76, UH-60, RAH-66, ABC, Fantail, Shadow, Fly-by-wire demonstrator, CH-53E, S92. A former Designated Engineering Representative (DER) flight test pilot, he has been a member of several National Academy of Sciences, NASA, AHS International, FAA and Advisory Group for Aerospace Research and Development (AGARD) committees, and holds over 20 patents and three helicopter world speed records. He is currently a member of the National Academy of Engineering’s Aeronautics and Space Engineering Board and is a former member of the NASA Aeronautics Research and Technology Roundtable.

In addition to his achievements at Sikorsky, Lappos has been a vice president for Gulfstream Aerospace Corp., and a senior vice president and chief technology officer for Bell Helicopter, Textron. He has also served as Chairman of the Vertical Lift Consortium, from 2009 -2010 and again from 2012 to the present. In that role, he’s responsible for the leadership and administration of the self-formed (Department of Defense) DOD consortium for the vertical lift industry.

Lappos graduated as a Bachelor of Aerospace Engineering from the Georgia Institute of Technology in 1973.  Honors include Dean's List, Who's Who in American Colleges and Universities, Tau Beta Pi, and Sigma Gamma Tau. He was elected to the Academy of Distinguished Alumni of Georgia Tech in 2004. Lappos is also a recipient of the Sir Barnes Wallis Medal for significant contributions to innovation from the UK Guild of Air Pilots and Navigators, 2013 and an Honorary Fellow (2013) and Technical Fellow (1995) of the AHS as well as a three-time recipient of the Frederick Feinberg Award as most outstanding pilot. In 2018, he was awarded the AHS Nikolsky Honorary Lectureship. In 1988, he received the Society of Experimental Test Pilots Tenhoff Award. He is a decorated veteran of the Vietnam war, where he flew Cobra helicopters.