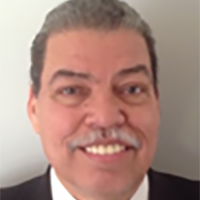 Richard A. Baugh is the Treasurer of the Howard Baugh Chapter of the Tuskegee Airmen, Inc. (HBC-TAI) and son of the namesake of this organization based in Petersburg, VA. HBC-TAI is one of 55 nationwide chapters of Tuskegee Airmen, Inc. whose mission is to preserve the legacy of the WWII heroes known as the “Tuskegee Airmen” and to use that legacy to inspire youth to pursue careers in STEM, Aviation, Aeronautics, and Aerospace.

Howard Lee Baugh was born in Petersburg, VA on January 20, 1920. He attended public schools in Petersburg and Brooklyn, NY and graduated from Virginia State College (University) in 1941. Baugh entered the U.S. Army Air Corps as an Aviation Cadet in March 1942. He completed pilot training at Tuskegee Army Air Field in November 1942 (Class 42-J-SE) and was commissioned as a 2nd Lieutenant.

In July 1943, Baugh was deployed to Sicily as one of the first group of replacement pilots for the 99th Pursuit Squadron. Flying P-40 & P-51 Fighter aircraft out of Sicily and Italy during WWII, he flew 136 combat missions. On January 27, 1944, Baugh was credited with 1.5 Aerial Victories while the 99th Pursuit Squadron protected the Allied occupied Anzio, Italy beachhead from aerial attack by German Focke-Wulf FW-190 fighters.

After the war, Baugh remained in the military as a Command Pilot and career officer for more than 25 years. During that time he amassed nearly 6,000 pilot hours, including 240 in combat and 1,100 in jet aircraft.

Baugh retired as a Lieutenant Colonel from the USAF on June 30, 1967. He then embarked on a second career joining Eastman Kodak Company in Rochester, NY. Baugh retired from Kodak in 1984 and moved back to Petersburg with his wife, Constance.

Once retired, Baugh became a much sought after Speaker for his unique insights into the Tuskegee Airmen Experience. He spoke at Schools; Colleges & Universities; Small Companies; Large Corporations; Organizations; Groups; and Military Bases throughout the US, Europe, and even in Greenland and Iceland.

Howard Lee Baugh passed away on August 23, 2008. He was preceded in death by his wife of 54 years, Constance, and his older brother William. He was laid to rest with Full Military Honors at Arlington National Cemetery next to his wife.

The legacy of Howard Lee Baugh will live on through HBC-TAI; his (3) sons: Howard, David, & Richard; (2) daughters-in-law; (4) grandchildren, (4) great grandchildren; (1) brother; (1) brother-in-law; many nieces, nephews, cousins, friends, admirers, and countless others around the world whose lives he touched and inspired.