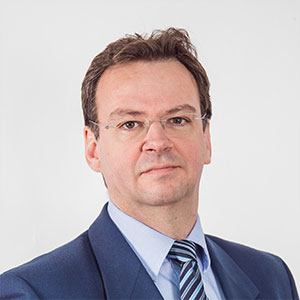 He started his career at Thales Group in 1997 and spent 13 years within this group, dealing with embedded electronic systems and avionics systems for both civil and military applications. He occupied positions of program manager on the Mirage 2000-5 or Airbus A350 XWB. After several years spent on commercial programs, he took the position of Head of Research and Innovation within Thales Avionics in charge of the preparation of the product policy strategy for the next civil Aircraft generation.

In 2010, he joined the Clean Sky Joint Undertaking as Project Officer in charge of the Helicopter domain and contributed to the successful achievements of rotorcraft activities in Clean Sky 1.

He was involved in the preparation and the launch of the Clean Sky 2 programme and was appointed in 2014 project officer of the Large Passenger Aircraft domain.

In May 2019, he was appointed Head of the Clean Sky 2 programme, in charge of the progamme coordination of the and the delivery of results by end 2024.

Sebastien DUBOIS holds a Master of Science in Electronics granted in 1996 from Ecole Centrale Marseille in France.

Connect with Sebastien on linkedin