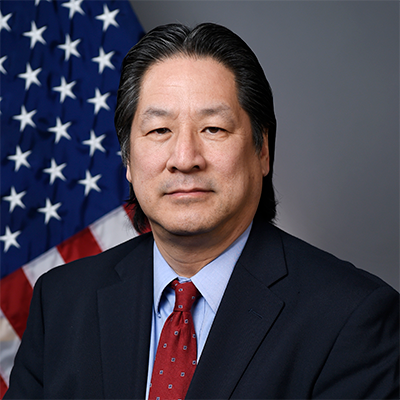 Dr. Thomas Fu is the head of the Mission Capable, Persistent and Survivable Naval Platforms Department of the Office of Naval Research (ONR). As department head, Dr. Fu oversees a broad range of S&T programs for Navy and Marine Corps platforms and undersea weapons, with an annual budget of over $500 million per year.

Dr. Fu entered the Senior Executive Service in September 2015. He began his federal civilian service in 1988 at the Naval Surface Warfare Center, Carderock Division, working part-time as a mechanical engineer while in graduate school. After receiving his doctorate in mechanical engineering in 1993, he became a full-time research engineer. In 2001, Dr. Fu was promoted to senior research engineer and was named Head of the Resistance & Propulsion Division in 2008. In 2010, he became Deputy Head of the Hydromechanics Department, which became the Naval Architecture & Engineering Department in 2012. The department—then comprised of approximately 650 engineers, scientists and other personnel—served as the Navy's technical capability for surface- and undersea-vehicle hull forms and propulsors. Dr. Fu provided day-to-day operational and technical management, as well as served as the department’s director of Science & Technology and Naval Engineering Education Center program manager. In October 2014, Dr. Fu became a program officer in the Sea Warfare and Weapons Department at ONR.

Dr. Fu has authored over 140 technical publications. He earned a Bachelor of Science degree in ocean engineering from Purdue University in 1984; a Master of Science degree in physical oceanography from the Scripps Institution of Oceanography, University of California, San Diego in 1988; and a doctorate in mechanical engineering from Johns Hopkins University in 1993. Dr. Fu was a George Washington University Visiting Scholar in 2013 and adjunct faculty member in 2014. He has also been an adjunct faculty member at the University of Maryland and Oregon State University.

Dr. Fu was named the Asian-American Engineer of the Year by the Chinese Institute of Engineers-USA in 2012 and a Fellow of the American Society of Mechanical Engineers in 2018. His other awards include a Meritorious Unit Commendation (2013) and the David Packard Excellence in Acquisition Award (1998). Dr. Fu also currently serves as the Navy’s NATO-Applied Vehicle Technology Panel member, and as the Editor-in-Chief of the Society of Naval Architects & Marine Engineering (SNAME), Journal of Ship Research.