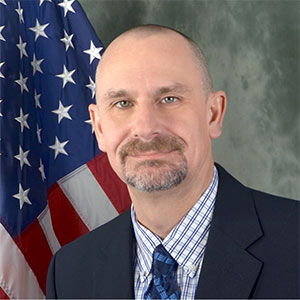 Dr. Timothy J. Bunning, a member of the Scientific and Professional Cadre of Senior Executives, is the Chief Technology Officer for Air Force Research Laboratory, Air Force Materiel Command, headquartered at Wright-Patterson Air Force Base, Ohio. As the primary science and technology advisor to the AFRL Commander, he is responsible for assisting with the planning and execution of an annual $2.8 billion Air Force science and technology program and considerable resources executed on behalf of a variety of customers. He serves as the corporate-level science and technology interface for a government workforce of nearly 6,000 people in the laboratory's nine technology directorates and 711th Human Performance Wing.

Dr. Bunning joined AFRL in 1990 in the Materials and Manufacturing Directorate as a Ph.D. student. His research was funded through an Air Force Office of Scientific Research doctoral fellowship and conducted on-site within the directorate. After earning his doctorate and conducting post-doctoral studies at Cornell University, Ithaca, New York, he spent six years as an on-site contractor in the directorate before transitioning to civil service there in 1998. He has served in numerous positions including as a bench scientist/engineer, first- and second-level supervisor and research leadership positions within the directorate between 1998 and 2015 when he was selected to be the directorate’s Chief Scientist. He served in that position until his appointment as the AFRL Chief Technology Officer.

Dr. Bunning is active in numerous technical communities and is a Fellow of AFRL, the Optical Society of America, the Society of Optical Engineering, the American Physical Society, the American Chemical Society, the Royal Society of Chemistry, the Materials Research Society and the Polymeric Materials Science and Engineering Division of ACS. His research interests center on responsive optical, electro-optical and photo-optical structured organic and hybrid materials and approaches for utility in optical sensing, laser beam control and filtering (modulation) applications. He has co-authored more than 300 referred papers and more than 130 proceedings, has provided editorial in several books and holds 18 patents. He is currently an adjunct professor in the Department of Materials Science and Engineering, Georgia Institute of Technology and is on the editorial boards of several materials-centric journals.