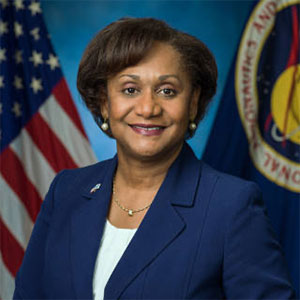 Vanessa E. Wyche is the director of NASA’s Johnson Space Center, home to America’s astronaut corps, Mission Control Center, International Space Station, Orion and Gateway programs and its more than 10,000 civil service and contractor employees. She is responsible for overseeing a broad range of human spaceflight activities, including development and operation of human spacecraft, commercialization of low-Earth orbit and Johnson’s role in landing the first woman and first person of color on the surface of the Moon.

Wyche was most recently deputy director at Johnson, a position she held since 2018. Other key leadership positions Wyche has held at NASA include: assistant and acting deputy director of Johnson; director of the Exploration Integration and Science Directorate, flight manager of several missions of the retired Space Shuttle Program, executive officer in the Office of the NASA Administrator, and led additional center-level technical and program organizations. Before joining NASA in 1989, Wyche worked for the Food and Drug Administration in Washington D.C.

Wyche has received many prestigious awards including two NASA Outstanding Leadership Medals, two NASA Achievement Medals, and is a “Women at NASA” awardee. She’s been recognized as a national “Women Worth Watching” honoree by Profiles in Diversity Journal, and “Inspiring Woman from South Carolina” by Coastal Carolina University. She is a current fellow of the International Women’s Forum.

A strong supporter of innovation and inclusion (I&I), she serves as a member of JSC’s I&I Council and advocates for mentorship at all levels. She is also a passionate promoter of science, technology, engineering, and math (STEM) serving on the Houston Exponential board of directors, is a member of the University of Houston’s C. T. Bauer College of Business Advisory Panel and is a past chair of the Space Center Houston board of directors. Wyche is active in multiple organizations in her community sharing her passion for STEM and future leader development.