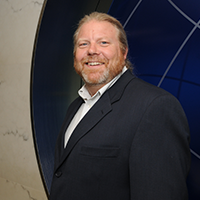 Walt Everetts is Vice President, Space Operations and Engineering for Iridium, where he is responsible for overseeing and monitoring the Iridium space-based network operations, the teleport network of antennas around the world and the development & deployment of upgrades to support future system enhancements. His responsibilities encompass all aspects of constellation management, as well as space engineering supporting software enhancements to fully serve the end user communications needs and expected availability.

Mr. Everetts started his career working in the aerospace industry with specific responsibilities in commercial communication satellite integration, testing, and launching. In 1996, he joined the satellite communications division at Motorola as the manufacturing manager responsible for the delivery and deployment of the Iridium program spacecraft constellation. After completion of the original Iridium satellites, Mr. Everetts took on a new program management position at Motorola, where he was assigned to projects in more than 40 countries and a multitude of different product lines in the telecommunication industry. In February 2008, Mr. Everetts rejoined Iridium as the Space Systems Operations Director. In 2013, he was promoted to his current role of VP, Space Operations and Engineering.

Mr. Everetts holds a Bachelor of Science in Aerospace Engineering from the Pennsylvania State University.