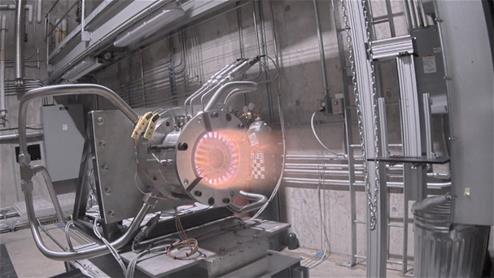 Overview
Unlike conventional isobaric combustion, pressure gain combustion (PGC) is focused on technologies that are able to increase the pressure of the working fluid through the combustion process without the need for additional mechanical compression.  PGC can be achieved with either deflagration or detonation although the mechanism for pressure gain would be different depending on the method of combustion. Regardless of the approach, PGC offers greater work availability compared to isobaric combustion, but it has unique challenges. As a result of the potential improvement in cycle efficiency, as well as advances in computational and experimental methods, there has been a growing interest in PGC for applications in aerospace propulsion and power generation.

This course provides an overview of the unique aspects of PGC.  The course introduction will begin with a historic perspective of PGC and include thermodynamic theory comparing PGC to other relevant power cycles.  This is followed by an overview of several major classes of PGC such as Pulse Combustion, Wave Rotor Combustion Engines (WRCE), Pulse Detonation Engine (PDE) and Rotating Detonation Engines (RDE).  As PGC research has its own unique challenges, the course offers a review of relevant and state-of-the-art computational and experiments methods that are utilized in both fundamental and more applied studies.  The course will include a discussion of systems integration along with lessons learned from some demonstrated applications. Government funded programs have been critical and the course will include an overview of the various programs and potential roadmaps for helping to advance the technology forward. Instructors from this course come from various reaches of technology development including fundamental research, program direction and industry.

Who Should Attend: The course is designed to provide an introduction and a refresher for project engineers, researchers, students, scientists, and managers engaged in pressure gain combustion systems.

Instructors
Lead Instructor: Dr. Frank Lu is a Professor of Mechanical and Aerospace Engineering at the UT Arlington. He has worked in an academic setting in experimental aerodynamics and aerospace propulsion for over 30 years, as well as consulted in these areas.  His primary expertise is in shock/boundary-layer interactions and in applications of detonations for aerospace propulsion and in aerodynamics test facilities. He co-edited an AIAA Progress Series volume entitled Advanced Hypersonic Test Facilities, which was well received by the aero-test community.  He is lead author of a proposed text on hypersonic vehicle design that will be published in 2023.  Dr. Lu earned his degrees from Cambridge, Princeton, and Penn State.  He is a Life Fellow of AIAA, a Distinguished Life Fellow of the International Shock Wave Institute, a Fellow of ASME and RAeS, and a Guggenheim Fellow.  He is active in AIAA activities, having served as Editor-in-Chief of the Progress Series and as Vice President of Publications amongst various roles.

Dr. Don Ferguson is a Research Engineer for the US Department of Energy (DOE) at the National Energy Technology Laboratory in Morgantown, West Virginia.  He has over 25 years of experience in research and development associated with combustion in gas turbine and reciprocating engines.  Dr. Ferguson is currently the Principal Investigator for the NETL Pressure Gain Combustion program which is exploring the potential of rotating detonation combustion to enhance thermal efficiency for gas turbine engines.  He is also the Technology Lead for DOE’s Advanced Turbines Program for research associated with pressure gain combustion.  Dr. Ferguson is the DOE representative to the government led Propulsion and Power System Alliance Leadership Team and the Department of Defense Advanced Turbine Technology for Affordable Mission capabilities Steering Committee.  He has a BS in Aerospace Engineering, and MS and Ph.D. in Mechanical Engineering.  He is an active member of the American Society of Mechanical Engineers (ASME) and the American Institute of Aeronautics and Astronautics (AIAA) where he currently serves as secretary for the AIAA Pressure Gain Combustion Technical Committee.

Mr. Tom Kaemming has worked for 52 years on Advanced Propulsion Systems.  His experience ranges from Space Shuttle to missiles to military aircraft and space planes.  His areas of expertise include rocket engines, turbine engines, ramjets, scramjets, and other advanced engine cycles.  He is a recognized leader in engine thermodynamic cycle analysis and performance prediction techniques. On the National Aero-Space Plane, NASP, he was lead of the joint NASP Inlet team. He was Principal Investigator and Program Manager of Boeing Phantom Work's Pulsed Detonation Engine, PDE, research and development.  In 1997, Mr. Kaemming was honored by selection to the McDonnell Douglas (now Boeing) Technical Fellowship for his work in advanced airbreathing propulsion systems.  Mr. Kaemming is an Associate Fellow in the American Institute of Aeronautics and Astronautics, AIAA, as well as the AIAA 2013 Air-Breathing Propulsion Award recipient.  In 2017, he received the JANNAF Lifetime Achievement Award for his work on airbreathing propulsion systems.

Dr. Razi Nalim is Executive Associate Dean for Research & Global Initiatives for the Purdue School of Engineering & Technology in Indianapolis.  He has led industry-university research consortia to develop pressure-gain combustors for powerplants and jet engines, emissions controls for large-bore gas engines, and autonomous and electrified vehicle technologies. His research for NASA and Rolls-Royce led to the first US demonstration of a wave rotor combustor at Purdue University’s Zucrow Labs. He has been active in the Gas Turbine and Pressure Gain Combustion technical committees of AIAA, organizing technical sessions and teaching short courses. He conducts workshops in project-based active learning in STEM education and has received awards for undergraduate research mentoring and teaching. He has published widely, received 7 patents, and was supported by over $12 million in research and training grants from industry and government.

Dr. Craig Nordeen is a mechanical engineer with 30 years’ experience in advanced design of jet engines and engine components at United Technologies.  He graduated in 2013 with a Ph.D. in mechanical engineering from the University of Connecticut.  His dissertation is “Thermodynamics of a Rotating Detonation Engine.” He currently pursues detonation research as a consultant under the name of New Cycle Engineering LLC.

Dr. Daniel E. Paxson is an aerospace research engineer in the NASA John H. Glenn Research Center’s Research and Engineering Directorate. He earned his B.E. degree in mechanical engineering from Vanderbilt University and his M.S. and Ph.D. degrees at Rensselaer Polytechnic Institute.  Since graduation, Dan has been at NASA conducting both experimental and analytical research in the areas of unsteady fluid mechanics, gasdynamic propulsion and power systems, and pressure gain combustion.  He has developed simulation, design, and optimization software, and designed or assisted the design and operation of experiments for wave rotor technologies, active combustion instability control, high speed valve systems, pulsed ejectors, resonant pulsed combustors, pulse detonation engines, and rotating detonation engines. He has served numerous times as a subject matter expert in these areas for the U.S. Departments of Defense and Energy.  Dan is an Associate Fellow of AIAA.  He serves on the AIAA High Speed Airbreathing Propulsion Technical Committee (TC), and the AIAA Pressure Gain Combustion TC.  He is also a member of the JANNAF Pressure Gain Combustion Working Group.

Dr. Douglas Schwer received his doctorate in Mechanical Engineering in 1999 and did a brief post-doc at MIT before joining the Naval Research Laboratory in 2001. Since 2009 Dr. Schwer has been the lead investigator for numerical simulations of rotating detonation engines at NRL, writing a suite of codes to examine different aspects of RDEs, with numerical models and algorithms based on previous work accomplished at NRL in pulsed detonation engines.  He has studied several different aspects of RDEs numerically from basic flow-field thermodynamics to dynamics found in full rig simulations and has been an active participant of AIAA forums in pressure gain combustion at all levels.

Mr. Jeff Stout has become one of the most experienced researchers of rotating detonation engine technology in the US over the last 12 years. He has acted as chief engineer, project engineer, lead designer, and experimentalist for many projects that featured an RDE as the core technology. These include: designing dozens of RDE engine sets with over 70 injectors, setting up offsite hot fire test at 12 different facilities, conducting 28 test campaigns and executing thousands of hot fire tests.  Prior to his work with RDEs, he has also been the principal investigator, primary designer, and test engineer for over a dozen liquid rocket engine (LRE) technology development programs conducting over 800 hot fire tests in this field. His work with LREs emphasized developing combustion chambers and nozzles utilizing advanced ceramic matrix composite materials, many of them with integrated active cooling for high heat flux applications.

Dr. Venkat Tangirala is a propulsion and combustion engineer with over 30 years of experience on research and development of aviation propulsion, combustion and pressure gain systems including pulse detonation engines and rotating detonation engines. He has worked across several industries including aviation, power generation and nuclear power. He is currently Technology Director at CPEC Technologies located in Schenectady, New York.  His experience over three decades includes experimental and computational investigations of combustion and thermal-fluid systems, mostly at GE Aviation and GE Research Center in Schenectady, New York.  He graduated from the University of Michigan, with a Doctorate degree in Aerospace Engineering.  He has extensive analysis experience in pressure gain combustion, fluid dynamics, heat transfer aspects of PDE and RDE application space.  He also has computational and experimental research credentials in the areas of autoignition, self-excited dynamics and their role in gas turbine combustors. Venkat has over 30 patents and over 200 publications, a majority related to pressure gain combustion systems.