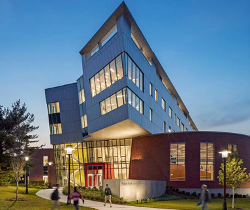 The AIAA Region I Student Conference is a technical and oral paper competition for undergraduate and graduate students of all majors! Connect with professionals in the Aerospace industry and meet other like-minded students who share similar interests throughout the North-Eastern United States. Students have the chance to compete for cash prizes in a fun-filled two-day event. First-place winners will be offered a chance to compete in the 2022 International Student Conference, taking place in conjunction with the 2022 AIAA SciTech Forum, with flight, lodging, and most expenses paid.

This is a VIRTUAL EVENT via Zoom - Meeting links and conference booklet/program will be emailed to attendees one week before the conference starts.

The deadline to register is Saturday, 27 March 2021. The first 100 registrants will receive a complimentary souvenir package in addition to the official conference T-shirt.

All registrants will receive a conference T-shirt. For shipping, the following information is needed:

The Impact of Research & Engineering on Aviation Safety

The Portrait of Three Accidents
Between May of 1996 and September of 1998 there were three commercial airplane accident caused by fire/explosion, killing a total of 559 passengers and crew. This presentation looks at the causes of those accident and the effort to make sure that accident like those never happen again. The Research, Engineering, Testing and Development as a result of those accidents is explored. Safety improvements are discussed and regulatory changes that make flying safer are introduced.

Ms. Martin Wallace is currently the Executive Lead for the USPTO’s new initiative the National Council for Expanding American Innovation (NCEAI).  The NCEAI, comprised of representatives from industry, academia, and government, will help guide the USPTO in developing a comprehensive national strategy to build a more diverse and inclusive innovation ecosystem by encouraging participation demographically, geographically, and economically.

As part of her twenty-eight year career at the USPTO, she recently served as Deputy Commissioner for Patent Quality where she was responsible for sustaining the high quality of the USPTO’s patent examination processes and products. She also served as Assistant Deputy Commissioner for Patent Operations, where Ms. Martin Wallace oversaw operations in the software technology centers, served as executive co-lead on the implementation of the AIA First-Inventor-to-File statutory framework, and led the implementation of the Office of Patent Examination Support Services.

The mechanisms associated with the owls’ silent flight have been an active scientific research for decades as an inspiration to find solutions for noise reduction applications. Aerodynamic noise generated during flight is associated with the fluid-structure interaction phenomena and the turbulent nature of the flow. The coupling between the turbulent wake and the wing motion governs the aerodynamic forces acting on the owl. Understanding of the wake-flow dynamics can elucidate the aerodynamic mechanisms employed by owls during flight and provide insight to the potential reduction of the aerodynamic noise. We flown several owl species in a climatic wind tunnel specially designed to accommodate birds’ flight at different altitudes. The near wake flow field was measured using PIV system and the owls’ kinematics were characterized using high-speed imaging, simultaneously. Large lift and drag variations over the wingbeat cycle were observed, demonstrating the unsteady flow effects on lift. The drag developed over the owl wing appeared to be relatively high. The near wake of the owls did not exhibit any apparent shedding of organized vortices. Turbulent energy budget at the wake depicted low values of turbulence production compared to relatively high values of dissipation. The pressure gradients which are proportional to the aerodynamic noise appeared to be suppressed, indicating the presence of a passive control mechanism. We suggest that owls manipulate the near wake to suppress the aeroacoustics signal by controlling the size of vortices generated and increasing the turbulence dissipation rate at the near wake region.