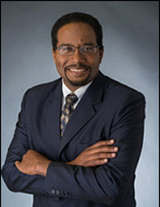 Homesick after a long trip west, the Spotlight swung its beam around to the east coast, shining on the University of Maryland, College Park, and illuminating Dr. Darryll Pines, AIAA Fellow, and dean and Nariman Farvardin Professor of Engineering at the university’s A. James Clark School of Engineering.

Pines began his tenure at the University of Maryland, College Park, in 1995, as an assistant professor in the Clark School of Engineering. Prior to becoming dean in 2009, Pines served as department chair of aerospace engineering from 2006 to 2009. Under Pines’ leadership, the aerospace engineering department became one of the top five public school aerospace engineering programs in the nation, according to the U.S. News & World Report rankings. As dean of the A. James Clark School of Engineering, Pines has made notable contributions in the areas of instruction, increasing student retention, and achieving success in engineering competitions. Pines has also placed great emphasis on sustainability engineering, service learning, and promoting STEM education among high school students.

Pines has been a fierce advocate for STEM programs, testifying before Congress on their importance. He has also worked with the state of Maryland to establish the Top 25 Source Schools program, which recognizes the efforts of Maryland high schools to prepare students for entry to the Clark School. Additionally, Pines also serves on the American Society for Engineering Education’s Deans Council’s K–12 STEM Committee where he works alongside the deans of other engineering schools to heighten the public’s awareness of the importance of STEM education; to highlight the impact of public policy efforts on STEM education; and to provide a forum to foster dialog among member schools for best practices and as a space to collaborate on joint ventures.

During a leave of absence from the Clark School, from 2003 to 2006, Pines served as a program manager for the Tactical Technology Office and Defense Sciences Office of the Defense Advanced Research Projects Agency (DARPA). While at DARPA, he initiated five programs in the area of aerospace technology, earning a Distinguished Service Medal in recognition of his efforts. Pines has also held positions at the Lawrence Livermore National Laboratory (LLNL), Chevron Corporation, and Space Tethers Inc.

Pines is a Fellow of the Institute of Physics and the American Society of Mechanical Engineers. He is also the recipient of a National Science Foundation CAREER Award.

We began our conversation discussing why Pines got into aerospace and if he had any mentors or significant influencers along the way. He stated: “When I was a young child, I recall watching the moon landing with my father and brother in front of a fuzzy black and white television as Neil Armstrong took that great step for man and mankind. This I remember got me interested and fascinated about space and space travel. In my teenage years airplanes fascinated me. Also, meeting a few local Tuskegee Airmen who happened to live in the city I grew up was also inspiring. Finally, in high school, in 10th grade, I took part in the MESA program that exposed me to the field of engineering. That is when I decided I would become an engineer.”

When it comes to career memories, Pines spoke about three. First, he talked about working at Lawrence Livermore National Laboratory, relaying, “One of my fondest career moments was being a part of the team that worked on the Clementine S/C program while a member of O-Division at LLNL. This spacecraft was the first to use its remote sensors to infer that there was ice at the South Pole of the moon which suggests that the moon might be able to sustain life. This satellite launched in 1994 with funding from the Ballistic Missile Defense Organization (BMDO). It was a great accomplishment to be part of such an historic finding.”

Pines’ second memory involved “working with one of my graduate students, Dr. Suneel Sheikh, on a novel idea to use X-ray pulsars as navigation beacons to determine a spacecraft's state vector using rotating pulsars. This novel idea later became the foundation of a large DARPA Program called XNAV and has been verified by data obtained from X-ray detectors to prove that it is actually possible to determine a position fix from signals measured from rotating pulsars. Now, there are hundreds of citations of our original work! My third fondest career moment is inspiring a group of Clark School of Engineering students to design, build and fly a human-powered helicopter called Gamera to compete for the American Helicopter Society’s Igor Sikorsky Prize. While the team was not successful, the project inspired numerous innovations and the Maryland team holds several flight records.”

Given his work with STEM education and his efforts to inspire K–12 students toward aerospace careers, Pines has this advice for students as well as for young professionals: “Follow your passion and dare to dream about making the impossible possible. The aerospace field was founded by dreamers who were pioneers who believed that air and space flight were achievable.” To young professionals, he also counseled: “Work on what you love and love what you do. Take risks and choose the path less traveled. Aerospace engineering is a great field.”

Continuing to talk about STEM matters, I asked Pines what he felt schools at the K–12 level could be doing better to prepare students for collegiate aerospace studies, and what universities and colleges could do to better prepare their students for professional careers. Pines answered, “I think we have arrived at a time for engineering to be part of the CORE curriculum, just like English, history, math and physics. Engineering should no longer be something that just a few learn. All students should learn something about the field of engineering. Fortunately, the Next Generation Science Standards have included information about incorporating engineering in the K–12 curriculum. It is up to individual states to carefully think about how best to expose students at all grade levels to engineering and in particular aerospace engineering. Maybe one day we will have an Advanced Placement Course in Engineering.”

I asked Pines, given his recent involvement on AIAA SciTech Forum’s Executive Steering Committee and his unflagging support of AIAA events throughout his career, what the value of AIAA events are to the aerospace profession and if he felt that individuals should make efforts to attend them? Pines replied, “AIAA forums like SciTech keep members updated about the latest policy, socioeconomic and technology issues facing the field. Aerospace professionals benefit from listening to leaders in the field discuss where things are headed and how they can play a role.”

We closed our conversation talking about the future of aerospace. I asked Pines what types of technology we can expect to see over the next 10–15 years, and what the future aerospace workforce look like. Pines gave a threefold answer to the question, explaining, “First, with the proliferation of unmanned systems, expect to see more and more applications over the years in air and space. Second, personal air vehicles should emerge in not the too distant future along with multidomain systems that operate on the ground, in the air and in the sea. Finally, expect for additive/advanced manufacturing and virtual and augmented reality to play critical roles in designing, training, manufacturing and engineering complex systems, as well as in enhancing the human experience.”

AIAA congratulates Dr. Darryll Pines for his selection as the January 2017 Spotlight subject, and wishes him the best as he continues to lead the Clark School of Engineering and make the impossible possible.