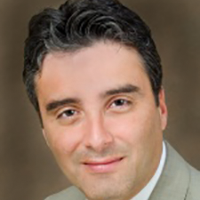 Rested from its brief trip home, the Spotlight ventured up the East Coast toward Lake Erie, shining its beam on Amherst, New York, and illuminating John Crassidis, an AIAA Fellow, and CUBRC Professor in Space Situational Awareness, and Director of the Center for Multisource Information Fusion (CMIF) at the University at Buffalo (UB), State University of New York, Amherst, New York.

Crassidis is one of the leading authorities in the areas of attitude determination and estimation, as well as general space situational awareness applications. He has developed numerous algorithms to determine the attitude of a vehicle from GPS signals, and he was the first to develop an algorithm to resolve GPS integer ambiguities without prior attitude knowledge. Additionally, he developed an innovative leak localization approach for the International Space Station. Crassidis’ most recent work has been in the area of resident space object attitude estimation. As director of UB’s CMIF he leads a team of researchers focusing on basic and applied research in multiple-source information processing environments, such as in multiple-sensor or multiply-instrumented systems. He is also the principal investigator for UB’s participation in the U.S. University Nanosat Program and NASA’s CubeSat Initiative. Crassidis has supervised over 60 graduate students during his academic career, and many of those have gone on to become professors and government program managers.

Crassidis is the winner of the 2016 J. Leland Atwood Award, for his “commitment to excellence in aerospace engineering education.” His other honors include UB’s 2014 Richard T. Sarkin Award for Excellence in Teaching; the 2012 AIAA Mechanics and Control of Flight Award; a 2006 AIAA Sustained Service Award; and the Society of Automotive Engineers’ 2006 Ralph T. Teetor Educational Award. The interview began with Crassidis discussing how he was inspired to enter the aerospace profession as he relayed, “My parents subscribed to National Geographic Magazine. As a kid I read the issue on the first moon landing over and over again, which began my fascination with aerospace.” He added, “I was fortunate enough to have been mentored by the best in the business. There are far too many to name here. If I were to name one then it would be my NASA Postdoctoral Adviser, Dr. F. Landis Markley, who taught me how to use fundamental math to put together the best possible engineering design.”

I next asked Dr. Crassidis what his favorite career memory is so far. He responded, “People always ask me ‘Was working at NASA as fun as it sounds?’ My answer is always a resounding ‘Yes!’ Also, seeing the excitement of the University at Buffalo students designing and building real satellites is something I treasure greatly.”

When it comes to young people either pursuing a degree in aerospace or just starting out as young professionals, Crassidis had this advice: “Enjoy the ride! There’s a lot to learn but the more they put into it, the more they’ll get out of it.” For young professionals, he also advised, “Never settle or get comfortable with anything.” Crassidis explained, “There are far too many exciting things happening in the aerospace world to just sit back, even for someone at my career point.”

When I asked him what schools could do better in grades K–12 to prepare students for collegiate aerospace studies, and what colleges and universities could do to better to ensure that their students are receiving the best aerospace education possible, Crassidis replied, “Experiential learning is one of the latest ‘buzzwords’ being mentioned. But this means nothing without a solid mathematical foundation. The advice I would give at all levels of pedagogical developments is to stress the math, and use it to drive the experiential learning process in order to fully understand how it translates to real-world applications.”

When I asked Crassidis about the value of AIAA to the aerospace profession and to aerospace professionals, he answered, “There is no doubt that AIAA brings together the best-of-the-best from a technical vantage point. For me, the best value was, and still is, student engagement. I still remember that ‘googly-eyed’ feeling when I met my technical heroes at the first AIAA conference I attended. What I found truly amazing was how they all took time to actually talk with me. AIAA is a special society because it also fosters personal relationships that start way back at the student level.”

I was curious to know how Dr. Crassidis felt about winning the J. Leland Atwood Award. He responded, “A tremendous honor would be an understatement! I wouldn’t be getting this award without the wonderful students I have the opportunity to teach every day. The award is really about them. They are actually my real boss, because without them I wouldn’t have my job.”

We closed our talk with a discussion about the future of aerospace. I asked Crassidis what he saw ahead for the future of aerospace, what technologies could we expect to see over the next 10–15 years, and what will our future workforce look like? He answered, “The future for aerospace is limitless. Obviously hardware advances have allowed us to do things now on much smaller platforms than 20 years ago, and for a fraction of the cost. This trend will certainly continue in the next 10–15 years. Future aerospace engineers will most likely need to be more multidisciplinary in nature.

AIAA congratulates Dr. John Crassidis for his selection as the February 2017 Spotlight subject, and wishes him the best as he continues to helps his students discover all that aerospace has to offer.