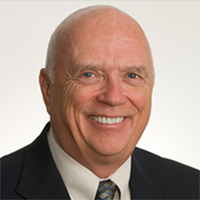 Wanting to see springtime in the Rockies, the Spotlight turned its beam west this month, falling on Colorado Springs, Colorado, and illuminating Dr. Robert C. Winn, an American Institute of Aeronautics and Astronautics (AIAA) Fellow, and chairman of the board, a principal of the firm, and director of aviation at Engineering Systems Inc. (ESI). Winn was the recipient of the Institute’s 2017 Distinguished Service Award, presented at the recently held AIAA Aerospace Spotlight Awards Gala at the Ronald Reagan Building and International Trade Center in Washington, DC.

Winn’s career in aerospace has spanned both military service and service in private industry. He started his career in the U.S. Air Force as an instructor pilot on the T-37 jet trainer as well as other aircraft. He later served as a C-130 aircraft commander with the 61st Tactical Airlift Squadron. In 1976, he began teaching at the U.S. Air Force Academy, leaving briefly to become chief scientist at the U.S. Air Force European Office of Aerospace R&D. Retiring from the U.S. Air Force in 1991, Winn was a private consultant before he joined ESI in 1994 as a senior consultant. He became principal engineer and director of Colorado operations for ESI in 2002, and chairman of ESI’s board of directors in 2009.

Winn has also provided outstanding service to AIAA through his many years of membership with the Institute. He began his service as a section officer in the AIAA Rocky Mountain Section. In 1984, he became a member of the Terrestrial Energy Systems Technical Committee (TC). In 1990, he became a member of the Technical Activities Committee’s (TAC) New Initiatives Subcommittee. He went on to serve as the director of TAC in the field of energy conservation, and in 2001 he became vice president of TAC. In 2004, seeing a need for AIAA to expand its scope of interest to include emerging technologies, Winn created the Emerging Technologies Standing Committee, an initiative he chaired until 2006.

In 2005, Winn became a Director–At-Large on the AIAA Board of Directors. Winn also served on the Institute’s Finance Committee, Institute Development Committee, and Compensation Committee. He served as the Institute’s vice president of finance from 2011 to 2015. He currently serves as a member of both the Investment Subcommittee and the Ethics Committee. He has served as a trustee of the AIAA Foundation, and he is an AIAA Distinguished Lecturer.

We began our talk discussing what inspired Winn to get into aerospace. He responded: “I got into aerospace almost by accident. I was working on my Master’s degree and I knew I would be draft eligible. So I started looking into other options and the Air Force was clearly the best answer for me. But when I got close to signing on the dotted line, my recruiter said that the Air Force had enough engineers, ‘but do you want to be a pilot?’ I said sure.” When it came to his early mentors, Winn’s fell close to home: “Regarding mentors, I’ve had many, but the best was my Dad. He did not have an engineering degree, but he was the best engineer I have ever known. He and I work on many mechanical projects. I could see that he loved it, and now I love it.”

When I asked Winn about this favorite career memories, he looked back over his long career and said he had three from various parts of his career. His first came as a pilot, as he relayed that he had a good memory of “landing a C-130 on a short uncontrolled airstrip with a load of nurses and patients on board.” The second took place in a courtroom, “Testifying in court as an expert on a VERY high profile litigation and getting the jury to understand and agree with my analysis and not with my opponent’s analysis.” The third memory came from his days as a professor, as he said, “teaching thermodynamics to cadets of all majors at the Air Force Academy and seeing the light bulb go on.”

When it came to advice for students pursuing an aerospace degree, or for those students still in high school thinking about pursuing an aerospace degree, Winn had this counsel: “Do it! If you enjoy understanding how things work and when they won’t, it’s fun and very rewarding. I would also say that joining a professional society is an important part of that. Most new engineers in the work force are doing jobs that have them totally immersed in a particular aspect of a design or analysis. Joining a professional society like AIAA gets a new engineer out of his/her stovepipe and give them a much broader view of their discipline. And you just never know when you will learn something that will be very valuable later on in his/her career.”

Being curious about Winn’s activities as an aerospace forensics investigator, I asked him to share a bit about the field and how a young person might go about preparing for entry to the field. Winn noted, “Forensic engineering is essentially figuring out why something failed. That takes a thorough understanding of the basics – the first and second laws of thermodynamics, Newton’s laws, how to write a program to do calculations to give you an insight how a particular system behaves. It requires a broad but VERY accurate view of a problem. And no matter what an eyewitness says, the laws of physics ALWAYS prevail. A thorough understanding of undergraduate engineering principles is essential.”

As this year’s winner of the Institute’s Distinguished Service Award, I asked Winn what his thoughts were about winning the award, “I look at the list of people who have won this award and I am more than humbled. But it tells me that anyone who is willing to lend their talents can make an impact – and be recognized by their peers.”

When I asked Winn to gaze into the crystal aerospace ball and predict what we might see ahead of us in the next 10 to 15 years, Winn replied, “Impossible to tell, but it will be fun. If you look back 10 years, you could have never predicted where we are now, particularly in electronics and the use of UAVs. So no predictions, but keep your eyes and ears open, because you never know when something you read in Popular Science about a development in medicine will have an application in aerospace.”

AIAA congratulates Bob Winn on his selection as the May 2017 Spotlight subject, and wishes him the best as he continues to lead ESI and thanks him for his long-time, multifaceted service to AIAA.