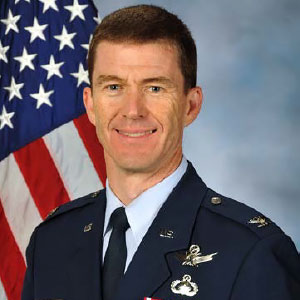 Colonel Bracy received his commission through Embry-Riddle Aeronautical University, Prescott Campus, in 1994. He has served as a developmental engineer and acquisition officer across a variety of operational, test, acquisition and staff positions.

His assignments include developmental engineer tours in space operations and space control in Air Force Space Command and GPS user equipment in Air Force Materiel Command as well as multiple acquisition assignments in the Space and Missile Systems Center.  Additionally, he has served in staff positions under the Assistant Secretary of the Air Force (Acquisition) as a program element monitor, the Assistant Secretary of the Air Force (Financial Management & Comptroller) as a Congressional liaison and in Headquarters Air Force Space Command as a requirements branch chief.  Colonel Bracy has also served as a DARPA Service Chief’s Program Intern and an executive officer to the Air Force Scientific Advisory Board.