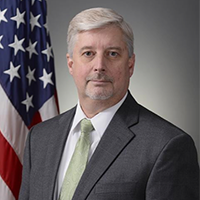 Following his military retirement, Mr. Penland continued his service to the Department of the Air Force as the point-man for Air Armament Center, Eglin AFB, managing operational issues for the BRAC 2005 bed down of the Joint Strike Fighter and 7th Special Forces Group on the Eglin complex. Mr. Penland was hand-picked to be the government lead for the Gulf Regional Airspace Strategic Initiative. A collaborative effort that brought together all the military services and communities at the local and state level to successfully develop strategies to integrate all military missions with civilian aviation and other requirements efficiently into Northwest Florida. In 2010, Mr. Penland was assigned as the Chief, Operational Basing and Operational Encroachment, Deputy Chief of Staff for Operations, Plans and Requirements, Headquarters U.S. Air Force, Washington, D.C. He was responsible for operational encroachment, mission sustainment, aviation energy, and strategic basing within the Operations, Plans, and Requirements Directorate. He was a member of the Basing Requirements Review Panel, subject matter expert and an advisor to the Strategic Basing Executive Steering Group, and the Air Force operational representative to the DoD Siting Clearinghouse.

Prior to his current position, Mr. Penland was the Chief of Combat Air Force Aviation Energy Current Operations, Office of the Deputy Assistant Secretary of the Air Force, Operational Energy, Pentagon, Washington, D.C.