As the world's largest and most influential aerospace professional society, AIAA members have been involved in nearly every advancement in modern U.S. aerospace. The NASA Apollo Program was certainly no exception. Throughout the duration of the program, AIAA members shared the triumphs and the setbacks, and our collective excitement and pride grew with each historic and inspiring mission milestone that was achieved. The Apollo Program will stand forever as a testament to what is possible when a team of intelligent, innovative, and driven individuals rally to achieve a shared goal. AIAA salutes the astronauts, engineers, technicians, program managers, mission directors, trainers, flight controllers, and the thousands of unsung heroes who answered President John F. Kennedy’s call—making his vision a reality.

FROM THE JOURNAL ARCHIVES

50 Papers for 50 Years
This virtual special section compiled by current journal editors and hosted by the Journal of Spacecraft and Rockets highlights AIAA journal papers related to the Apollo program. The papers represent a range of technical topics, time periods, and historical perspectives, and they are available in Aerospace Research Central for free! Click here to go back in time and see how AIAA ‘s journals documented the challenges the Apollo program faced along with the technical objectives that were achieved.

As we celebrate the 50th anniversary of the Apollo missions, we couldn't think of a better book to highlight. More than 30 years ago, Frank White coined the term "Overview Effect" to describe the cognitive shift in awareness that results from the experience of viewing Earth from orbit or the moon. Hear from Apollo astronauts and others in the latest edition of the book that started it all.

AIAA has teamed up with Higher Orbits, bringing students interested in space an exceptional experience through Go For Launch! This hands-on multiday program sparks the imagination of students in grades 8-12, and expands leadership, teamwork, and problem solving skills through science, technology, engineering, art and mathematics (STEAM). Teams will compete to have their experiment launched to the International Space Station in 2020. See when the Go For Launch! AIAA Apollo Series will be in your region!

From the 2019 AIAA AVIATION Forum

From the 2019 AIAA SciTech Forum 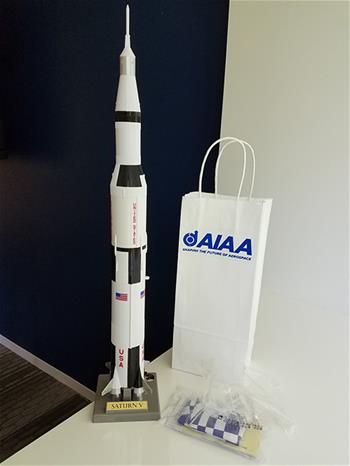 Be on the lookout for events or activities at the 2019 AIAA Propulsion and Energy Forum where you could walk home with a flight capable display Saturn V model rocket!

Events at the Propulsion and Energy Forum include:

• Student Welcome Mixer on Sunday, 18 August from 1800 – 1930 hrs. Note this reception is only open to students and the event sponsor.

These flight capable Saturn V model rockets are graciously donated to AIAA by Estes Industries to celebrate the 50th anniversary of the Apollo 11 moon landing. Learn more at Estesrockets.com. 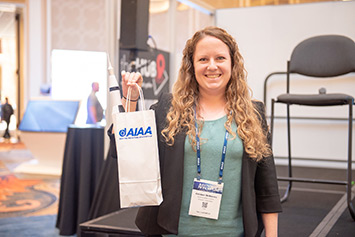 Several giveaways happened during the AIAA AVIATION Forum last month and here is a photo of one of the lucky winners!

Global Rocket Launch
AIAA is excited to join the worldwide celebration on July 16th of the 50th anniversary of the Apollo 11 mission launch by participating in the “Global Rocket Launch”. AIAA staff will convene at 9:32am (coinciding with the official launch time) and celebrate this momentous occasion with a rocket launch of our own! Check out AIAA’s twitter feed, #Apollo50th, for updates on the launch!

There was widespread public support of the Apollo program during the 1960s. While general public support of the space program has remained consistent over the years at 80 percent, opinion polls during the 1960s showed that most people, when asked, were not in favor of the space program and less than half did not think it was a good idea to send humans to the moon. Between 30 and 40 percent of those polled thought the Apollo program was worth the money; however, it rose to 53 percent favorability the week astronauts landed on the moon.

NASA had a virtually unlimited budget to accomplish their missions and goals. NASA’s budget today is roughly one-half of one percent of the federal budget. In 1962, it was about one percent and it peaked at 4.4 percent in 1966. The Apollo program is not the sole reason for this funding increase. NASA was still in its infancy. Not only were launch vehicles, spacecraft, and a lot of hardware being built, but many of the NASA facilities around the country were under construction as well as the hiring of a world-class workforce. Officials did see the Apollo program as a priority that allowed for the agency to address their needs and timelines rather quickly.

President Kennedy’s leadership was critical to getting us to the moon. Kennedy was more interested in solving his immediate problem, which was getting the Russians off his back. His famous 1961 speech before Congress where he said that we would land humans on the surface of the moon by decade’s end was a broader address about our urgent national needs. His moon ambition was item 8 of 11 articulated needs. It is also important to note that the president even considered partnering with the Russians in this effort to reach the moon.

The Soviet Union dropped out of the space race. Truth is, the Soviet program was not really organized. Their lunar program did not begin taking shape until they realized they were falling behind the United States in the summer of 1964. Instead of one focused effort, the Soviets chose to develop two separate programs. The first would send humans around the moon and back while the second would duplicate the Apollo program. Neither effort was very successful. In January 1969, Russian leaders decided to build in just six months a robotic probe that would land on and return samples from the moon. That mission took place at the same time as Apollo 11. The probe crashed on the lunar surface just after Neil and Buzz walked on the moon; thus, the moon race ended on July 20, 1969.